Posted by Mary Fletcher at 08:42 No comments: 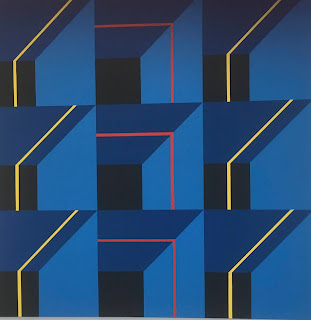 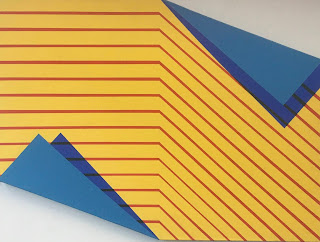 Anthony Gribbin paintings in the library, St.Ives, this month.

Anthony Gribbin’s work is a surprise in St.Ives. It’s the antithesis of what I call the Penwithy style that is so prevalent - loose marks that vaguely refer to land or seascape.
Instead this artist works very neatly and precisely with abstract designs that play with overlapping and spatial illusion and use flat unmodulated colours.

Some of the work is unusual shapes instead of the rectangle with which we are familiar. He has included information on his past exhibitions that indicates steady application.

In the library the geometrical shapes and lines of the paintings have a rather exhausting interplay of optical effects as they are too close for comfort together on the main wall. I would like to see them each given more space.

The play of flatness versus illusion is very clever and worth some time to experience its abstract fascination.

Posted by Mary Fletcher at 04:23 No comments:

Newlyn Society of Artists. 'Past, Present, Future' at Tremenheere Gallery Oct 16 to Nov 7 ,2021

NSA is an exclusive group in that artists have to apply to be chosen as members and then apply to be in each show subject to selection.

This show had a theme of celebrating the history of the society with many members referencing particular artists from the past membership over 125 years.

I happened to go when they were having a public discussion about the society and when I arrived they were discussing if the society could provide an online source and publicity for information that might include social community art.

Art therapy was mentioned without anyone gasping in horror.

When Mike Tooby, past director of Tate St Ives had interviewed me twenty years ago for something he said they threw away applications that mentioned art therapy but they fished mine out of the bin because they liked my drawings.

Now there's an artist exhibiting in the Tate drawings done by himself as art therapy when he was a child in Kosovo.

So somehow what I took to be based in fear of being associated with mental illness has dissipated as the wheel turns.

It's a diverse show with as usual most artists doing what they usually do but managing to fit it into the brief.

Delpha Hudson had a picture with women and children in it and referenced Elizabeth Forbes.

Winnie Lyn on the other hand showed some lumpy white objects as far from Terry Frost's work as could be imagined although she said inspired by it.

Julia Giles had a similar motivation to Peter Lanyon in being influenced by her sensory memory of landscape.

Kate Waters had chosen fellow mystical dreamer Ithell Colquhoun to ally with. Her painting was a smeary sexual looking image.

Noel Betowski had chosen to show a painting that depicted complex patterns of folded paper and he had been inspired by two paintings with paper lanterns by Percy Gotch and George Sherwood Hunter.

Pippa Young said in her statement that her inspiration was the act of creation in general and her image was a strange figure combining white and black body parts.

Of course such a theme dangerously invites comparisons with the more famous past members' works, long known and loved and done with such skill and observation that many visitors admire rather than our present confusion of styles and media.

There's bound to be something of interest and something to hate for most visitors in the 68 exhibits.

The panel discussion came to an end. It suggested some new social awareness and political involvement with the local community, perhaps to revitalise this oh so middle class elite enclave where pictures cost thousands of pounds and membership is closely guarded.

But were these suggestions coming mostly from academics and other non members involved with education etc?

Posted by Mary Fletcher at 09:07 No comments: 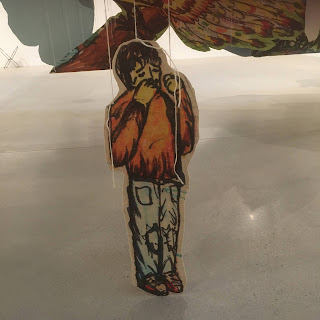 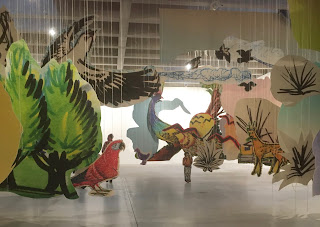 Art Therapy in the Tate!

How everything changes - Mike Tooby, past director of the Tate St.Ives , interviewing me for an artist's residency in the 90's, said they threw anyone's application that mentioned art therapy in the bin and only fished mine out because they liked my drawings.

I had concluded that the mainstream art world despised art therapy out of fear of being associated with madness.

Yet now here it is - Petit Halilaj worked as a child with art therapist Giacomo Poli and this helped him cope with the dreadful consequences of the war in Kosovo.

Now he has retrieved these vivid works, enlarged them, printed them on felt and hung them in the large gallery on knotted strings so that they form a whole forest of images - some frightening memories - some escapist fantasy - amongst which we can walk, catching sight of different views.

Knotted string often features in art therapy case histories - symbolic of trying to keep yourself together through trauma.

It's totally absorbing, tragic and lovely.

These pictures have a spontaneous energy.

This show takes your mind off your mundane worries and I emerged with that feeling of exaltation at having experienced something very important, easy to grasp and memorably moving.

Let's hear it for art therapists everywhere - we know how potent this can be - and how helpful.

How about an art therapist in every school?

Posted by Mary Fletcher at 08:53 No comments:

I bought this book because I have met the author and was curious about his sailing therapy project.

He explains it very well, referring to specific events, and writing vividly about it.

There are also personal reflections and his own history of addiction which makes him so suited to working with others who need help to change their lives.

He has shown that connections with nature and with other people are beneficial and that experiences also need to be voiced, heard and understood to make them meaningful.

There are things I would like to be better defined in this book. For example there are rather vague references to ancient Celtic practices which I think are inevitably insecurely documented and largely imagined by inventive archaeologists and eager present day seekers of meaning.

'Vision Quest ' is a term used without explanation.

Richard Hall is clearly very involved with myths and ritual but doesn't refer to James Hillman who has written much on these ideas.

He is open about the difficulties a therapist faces and the problems of funding his organisation ran into.

The book ends without explaining exactly where Richard Hall stands re many issues or what direction his life is going in now.

However overall I think it's a really interesting work about a very worthwhile outdoor therapy using sailing plus the workings of the group and the wisdom of the therapist.

Posted by Mary Fletcher at 08:39 No comments:


Melissa Hampson.Smith I found by chance as I walked home. She lives just round the corner and had her work outside in the small front garden - safer because of covid.

Colin Orchard was also nearby and always uses a square format. Only recently has he started to paint St.Ives 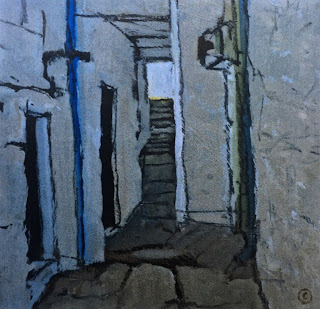 Third visit turned out to be an unopened studio as Suzi Gutierez had gone to Penzance but her husband let me in to have a look and I admired her new press. 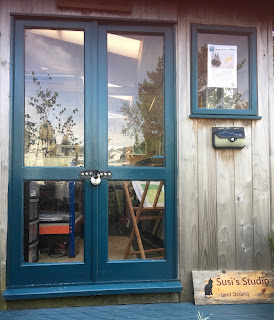 Interesting chats at all three places about art and galleries and memories.

On the way home, observation revved up, I took a photo of a disused phone box. 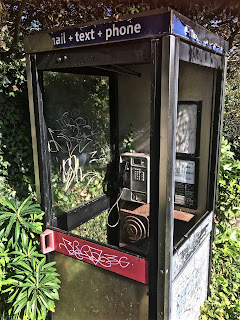 Posted by Mary Fletcher at 09:45 No comments:

Grayson Perry The Vanity of Small Differences Oct 3 - Jan 2 The Exchange, Penzance, Cornwall, UK These six large tapestries show the Hogarthian progress of a male character on a ' Class Journey’ using researches the artist made as he developed his 2012 tv series ' All in the best possible taste'. There were more people in the gallery than I have ever seen there apart from pre Coronavirus opening parties. All were masked and spaced and carefully examining the wealth of detail in the narratives and the way the fabric has a variety of textures. There is also a film about the weaving of the work. Grayson has produced a commentary on contemporary British life and class which can be witty and ingenious - focused on white characters. I enjoyed seeing the show. Grayson points out the art historical influences on the compositions in his lengthy written captions. I don't really like the horror vacui and the rather monotonous tones and textures but I admire the accumulation of observations which relate to class and taste. When Grayson makes a pot there is a satisfying beauty in the symmetry and form which then contrast alarmingly with the applied narrative content that can only be seen from a close look. That strange combination doesn't apply to the tapestries because although there are fascinating details to see up close you can see everything also at a distance. It's been a mammoth task to compile all the images but the all over complexity I find lessens the impact. It's well worth seeing nevertheless and admirable in its satirical contemporary relevance.
Posted by Mary Fletcher at 08:56 No comments: