1.Many people who are old, sick or alone won't find it that much different to 'self-isolate' from normal.
2.If everyone who is sick stays at home there should be a lot fewer colds and normal flu and a change from virtuous masochistic culture.
3. Would it be a good time to try out universal pay to cover food-claim it back from most later in tax?
4. If children are left with un checked adults there could be increased abuse.
5.Many parents might enjoy being at home with their children and want a life with a better work-life balance.
6.Home-schooling might increase in future and children might enjoy not being in chaotic overcrowded bullying environments where classes are too large. Some might learn more.
7 A year with no exams might be ok.
8. Time to read and play music and talk together at home.
9.Would be far worse without online stuff and phones.
10 Might be pressure to improve daytime tv.
11 Apparantly a lot cleaner air in Bejing etc where factories have closed?
12 Will humanity one day be wiped out by a similar but more deadly virus spread?
13.If they accidentally find a cure for the common cold during research for the new virus will we get the cure?
14. Motive to move the homeless into accommodation so they aren't coughing all over those that pass by?

15. Rationing may be needed if people panic buy.
Posted by Mary Fletcher at 03:41 1 comment:


Evelyn Williams died 2012, aged 83, having completed a body of work said to be hard to categorise and having left a Trust to help women artists. I was told at Anima Mundi that the director, Joseph Clark, found a painting by her in a charity shop and purchased it. It turned out to have been stolen from a show and he decided to organise this exhibition of her paintings. There were two books about her oeuvre to peruse.


Most of the works had two figures in them so the relationship between them seemed to be the subject. One had a naked woman emerging from the side of a naked man, recalling the biblical creation story. 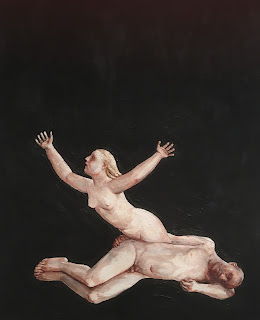 I didn't like the very pink fleshy tones of the bodies, a bit like Lucian Freud but not I think observed but imagined. The backgrounds contrasted with the bodies to emphasise them as the focus. They are striking works but to me didn't embody clear feelings. Maybe they are worked on too long which results in a certain heavy handedness. One small picture of two heads in watercolour was much more free and spontaneous 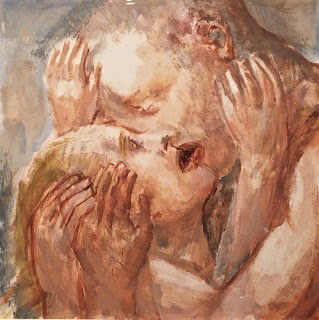 looking so I thought the artist in making large works had found it difficult to maintain her freshness of approach or maybe didn't value that and wanted to make more deliberated images when working on a larger scale. The artist said her subject was 'inner thoughts, other worlds'. 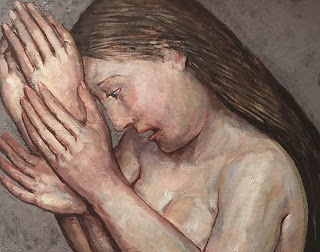 Reading about her I am horrified to see Evelyn Williams was sent to board at Summerhill before she was three and spoke of a remaining sadness from this. I would say she suffered abandonment by her parents. She also felt her whole generation were affected by the holocaust and did a great picture of a huge bomb exploding over a mass of people- depicted naked to show their vulnerability and give a timeless quality.


Anima Mundi shows a interesting video on the website of an interview of the artist on bbc Wales 2007 and I am left pleased to learn about her.


Carlos Zapata is from Colombia but lives in Falmouth. He uses a variety of materials for his sculptures of figures and works in different sizes. There are references to gods and to celtic culture. The waxed steel 'sacred book' has ragged looking pages with no discernible text as if it has been burnt. 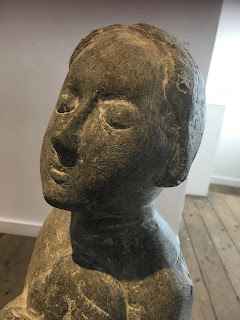 There was an expressive charcoal drawing 'bog man' and a roughly textured textile version in 3D.
'Celt' was a painting of a man as if dead with the head and genitals blocked out by added pieces of hessian - the reason not being apparent.

I like his figures when they are whole but the torsos and heads are more macabre.

I've liked other works by Zapata more than these but it's always interesting to see his sculptures because at their best they have are simple directness that is very appealing.


About 25 of St.Ives arty cognoscenti assembled to watch this 13 minute free performance.
I invited someone from the Pool club but he said it would be ultra sophisticated middle class impenetrable nonsense.


The dancer was a largish woman, probably over 50, who moved very deliberately and confidently, using various props and with a recording playing of seagulls, song and guitar.


There was a photo of a young man, a womb shape on the floor outlined in red cord, blank paper at first cradled like a baby and then torn up, finally some of it made into a bird shape that could fly away. There was some vigorous sort of South American dance, a bit scary at eye level from where I sat. There were stones moved and placed in a line and the performer sat gazing out of the window, sometimes reacting as if sharply noticing something.


I took it to be a sorrowful discarding of the torn up paper, perhaps the unlived life of a son who died? The dancing seemed a wild attempt to maybe pretend to be happy, or a brief respite from sorrow, followed by looking through the window for a shred of hope.


It had meaning to the maker but wasn't all that clear for the viewer. Dance usually has a written program that tells you the story and can be read before or after. As it was, seeing it cold, I spent all my time puzzling over the meaning.


At the end we were invited to ask questions but this was rather cut short by the performer saying she had said what she wanted to say in the performance. We were given cards on which to respond. Most people reacted by doing curvilinear drawings which were pegged on a line. I put a question mark.


I thought it was for the artist a lost opportunity to find out honestly what folk made of it.
These opportunities are rare outside college and here was a group of people who could have helped her communicate better in future - if she had been really interested in their understanding.

Reflecting on it I seem to have formed a cohesive interpretation - so perhaps inviting a response by email later would have been appropriate.


It was not nonsense, it was an effort to express something meaningful, done with serious intent and worthy of respect.

Note: I found out later that Cecilia is a student on the Porthmeor Programme - a lengthy mentoring course for artists.
Posted by Mary Fletcher at 09:17 No comments: