At Penlee a very interesting show explains the founding of The Penwith Society and includes documents such as one where Ben Nicholson defends modern art as a new language.
The controversial minutes of a Penwith Society are there, when 3 categories of art were instituted, traditional, abstract and craft.

Centre stage as visitors enter is Marian Hocken's 'The Hollow Men' of 1955, which referred to her personal relationships within the artists' community and cruel remarks about it probably lead to the artist becoming a recluse. There are three 'joannie' wooden figures above a view of St.Ives and the grave of Alfred Wallis and some tarot cards. It's a picture telling a tale that is now obscure but moving towards a simplified use of form.

I gleaned this long lost scandal by infiltrating a talk on the show by Robin Lenman, who was inviting his audience to contribute their responses and brought in remarks from Will Gompertz' 'How to think like an artist'. Having this knowledgeable person to inform and provoke really added to the experience. Attending the talk slowed down the visitors giving time to notice more.

There are other works before abstraction took over, such as a gentle, sweet and thoughtful drawing by Barbara Hepworth of two girls with teacups from 1949, the very year the Penwith Society formed, breaking from The St.Ives Society, which still survives and now shows a wider variety of art than the formerly more adventurous new Penwith, the Penwith being now dominated by its past allegiance to non - figurative art.

The three Bryan Wynter paintings were outstanding, the 1957 'Mineral World' being a complex layered composition of structures and colours, exciting to look at.

There was a Braque influenced Patrick Heron, a jigsaw puzzle of pink, green, blue, yellow, green with white outlines observed - a table in front of a window.
Without Heron's writing and American connections doubtless the fame of these St.Ives artists would not have spread so far.

There was an abstract Terry Frost, but with a title to show us his way of thinking, 'A Walk in the Snow' made during his time teaching in Leeds. In contrast was a powerful Wilhemina Barns-Graham 'Lilac and Amber' gouache from 1960 where she feels no need to hint at narrative.

Tony Shiel's 1963 'Four frightened bathers' shows a more surreal and wild move using human forms as he was said to oppose 'the 'tasteful' stuff that I feel was a helpful calm sanctuary from the horrors of WW2 and a way of recovering balance and sanity.

There was a Hepworth curved form in bronze with strings connecting parts that was hard to resist touching or attempting to play like a remade ancient musical instrument which embodied the new spirit of absorption in form.

Most unfortunately it seems no book about the show and it's important documentation of one of the major transformations in art history in the twentieth century is to be made but I hope enough documentation is kept for future use.

The back gallery at the Penwith has an informative exhibition about the formation of the Penwith Society and is showing a variety of works.
I was struck by an all male photo of members who were painted by one of them.
Now there would be a more equal mix of male and female artists than there were when the society formed.

My favourite items were the Wilhemina Barns Graham compositions playing with red squares on a red ground and the gentle sensitive portrait by Alethea Garstin.

Unusual in a members show are the embroidery by Alice Moore, 'Winter morning activity in St.Ives harbour' 1942-4, usually on show in the town library.
There are two figurative drawings by Elena Gaputyte who had held early exhibitions of modern art at the Sail Loft, and a large Ken Symonds naturalistic nude woman.
There are heavy looking sculptures, one entitled 'perpetual motion' by Paul Mount. 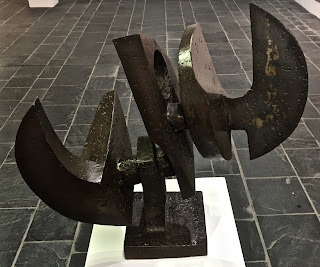 There's a work on metal sheet by Roy Walker, who had been a car worker in London.

There are lovely small pots by David Leach. 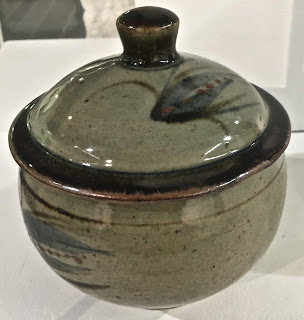 Thus the three categories of craft, figurative and abstract are shown together.

However, when I go towards the entrance I encounter the present members' show. What strikes me is that although there is maybe more vibrant colour in this there is in fact even more emphasis on abstraction, often related to landscape very loosely, and even fewer figurative pictures. The present members work in what is now a well worn tradition stemming from their more famous forbears. No surprises.
The Penwith Society gives its members a lovely gallery in which to exhibit their works but no incentive to develop anything new. Since these members choose any new members to continue the traditions of what was once ground breaking they take no risks and only select people who rock no boats. The associate members, of whom I am one, submit works for some shows, and are aware that nothing out of the comfortable groove will be chosen. There are some attractive and interesting works selected but rarely anything unusual. It's a time warp.

The associates' membership fees help keep the place going but they have absolutely no say in how things are run. A few years ago some of us formed a committee after a stormy meeting, a rare agm at the time, and tried to make contact with the members to make a few waves and open things up but it came to nothing. The status quo of two tier membership lumbers on.
Maybe the only way is, as the Penwith Society did, to break away and form another art society with more scope and more present liveliness. However it hasn't happened yet. There's no energy or gallery space for it in St.Ives.
Posted by Mary Fletcher at 07:37 No comments:

Why do I love this French serial cop show?
The title music is a gentle series of metallic sounds that make a tune as letters detach and move on a grey metallic background. It fits the title very well as a spiralling theme like the twofold unfolding plot. It immediately sets the scene of depressing menace and hopelessness.
The scenes are almost entirely grey, brown, grey, ochre and black apart from the female lawyer who ran down her rapist. She has vibrant long red hair.
Everyone dresses rather drably and hardly smiles. The judge is very grey, old and troubled. The two main cops are sometimes sexually entangled in a rather desperate sad way. The woman is unable to bond with the baby she had and left to the care of others. She looks fairly miserable but dedicated to finding the criminals. The male cop who fancies her is also repelled by her heartlessness to her child. He is prone to illegal methods, to violent interrogations, very unshaven and rough looking, overweight and yet compels sympathy. Surprisingly a very attractive young woman with those very French looking full lips is attracted to him but he gallantly does not succumb to her seductiveness.
The plot is fashionably hard to follow but fairly understandable. Different branches of the police are at odds with one another. There is money laundering via a network of Chinese businesses.
There's little overt violence, a lot of scenes of surveillance from a van or tailing cars through traffic at night.
It's a grim, grimy urban scene in which the cops attempt to track down bad people and aim at justice.
As in most cop shows the cops are the focus of interest, their flawed actions and personalities.
It occurs to me it would be interesting to show equally the criminals, how they are also a mixture of traits and foibles, prone to mistakes and different relationships.
Two one hour episodes back to back each Saturday night to which I look forward, doing my best not to fall asleep.
Being in French with subtitles means it's essential to watch all the time.
Maybe it's this concentration that makes it flash by so enjoyably.

Posted by Mary Fletcher at 02:52 No comments: