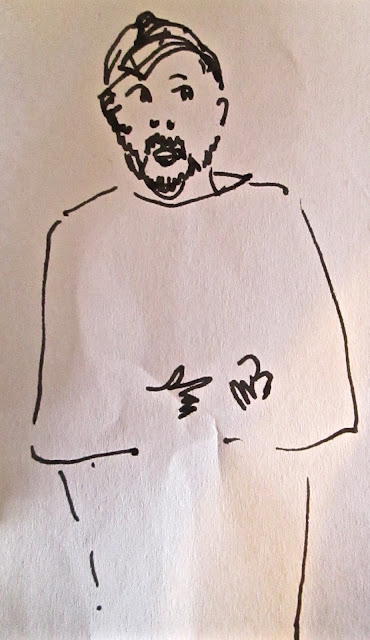 He's a bit manic, maybe nervous, very entertaining. He has worked using salt dough, felt, his work
is 'about the body and a product of the body', he likes to make references to earlier art.

It reminds me of Ellie Thomas making playful soft sculptures at Falmouth.

The pieces look very beautifully made, simplified shapes, clean lines and very attractive colours
such as those of sugared almonds. He acknowledges that his mother helped him make some.
He has been working in Rome, and in China. He wants an emotive effect on the viewer, maybe
participation, use of smells, collaborations, performance, use of masks, the 'mouth of truth'
like the one in one of the motorway service stations that gives you a prediction of your future and
goes back to Roman Empire times.

It's a good talk because I find all sorts of ideas flying through my head and have to make a few
notes in case they fly out again.

He has a big show coming up in Camden Arts Centre next year.

He gives out a lovely sense of permission to try anything.

Everyone is hungry by the end, waiting for the delicious buffet that follows.
I find Jonathan and ask him how much time he spends applying for career opportunities and he
says a lot less than his making time, but now he has opportunities offered. His work is known, the
advantage of showing in London with a footfall of some influential people.

He still hasn't eaten, too busy talking to interested people and goes off to find something now.
I give the disco a miss, feeling 17 again, everyone standing around not dancing until later, and walk
home through driving rain past the beach with wild waves, up the hill, still full of ideas and really
appreciating hearing about Jonathan Baldock's.