Lubaina Himid speaks well. The moment she began I relaxed into the absolute pleasure of hearing
a well prepared talk by someone who can speak clearly with wit and also was adept at answering
various complicated questions at the end before we milled about with delicious soup provided
afterwards.
Lubaina Himid has taught at the University of Central Lancashire at Preston for a long time and
has been working also as an artist since 1981. Because of this busy life she found her residency at
Tate St.Ives in the 90's, when Mike Tooby was director, very valuable as a space and time for
uninterrupted concentration. She returns to work at Porthmeor studios next Spring and will give
more talks and invite people in to see her work in progress.
Her themes have included slavery, fear and dread, safety and survival, and her media have been
various, including wooden figures and painting on ceramics she found, or on wooden carts or on
drawers.
Inspired by two piece East African clothing called 'tangas', which use text and image, she has
produced work including philosophy and politics and seeking an audience that imaginatively
respond. Often she allows the audience to touch or move elements of the installation. Lubaina
trained as a theatre designer and wants to communicate.
Recently Lubaina was at the Guardian for 3 days, one of the many opportunities now open to her
since winning the Turner prize. She has long collected all the pages of the Guardian that feature
images of black people and she has used them to make work that draws attention to the
unthinkingly insensitive juxtapositions that happen because no one is noticing how the pages work
together.
Lubaina Himid told us that in the past her work was often made for shows in museums, referencing
their collections. Often she considered throwing out works because they were taking up space but
luckily was persuaded to keep them. Now that she is a famous Turner prize winner galleries are
keen to have her shows, allowing greater freedom to work in ways that museums cannot because
they need to be so careful of their objects.
At Folkestone Trienale Lubaina Himid showed 100 life size cut out freestanding figures, each of a
black slave with their real name, their slave name and their circumstances written on them. Visitors
could walk amongst them.
We saw an accompanying slide show of works, often brightly coloured, lively figures, always with
important ideas in the making, with consciousness of dire situations in life, but hopes for people to
work to improve society.
I was very impressed.

Tate St.Ives talk by Nashashibi and Skaer on their exhibition, October 2018 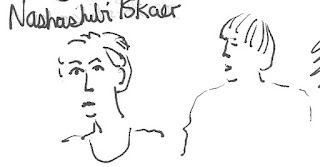 The audience persuaded the organiser that we would rather see the screen images than have light
stream in and that she needed to speak louder.The speakers were introduced by the curator who
said their names so rapidly that I did not get which was which. The speakers had not trained to use
microphones or to be animated and their delivery was tentative and glacier-like.
These two ex Turner nominees work together on projects using other peoples' art to prompt their
responses. I think of this as what Griselda Polock described as 'an avant-garde gambit' and I also
note the trendy a la Tacita Dean use of analogue film, then often translated to digital video.
The artists have the jargon, 'transgression', 'male gaze' etc., they have some ideas, but talking of
symbolic gestures I feel like making one because it's years since I felt so bored and I leave wanting
to scream. I sympathise with the priest at Matisse' Vence chapel who co-operated with them
wearily.
Afterwards I went round the show.
It's an excuse to bring us a lot of interesting paintings from the Tate and elsewhere, Bonnard,
Gauguin, Nash, Sickert, the Lee Miller photo of her in Hitler's bath, etc. The artists have been to
New York to take photos of museum objects at night, to Hongkong to film the ex-British consul and
to Tahiti to shoot where Gauguin painted. They have selected all sorts of art with vague
connections. Their videos are so slow moving that I couldn't watch them through.They have
selected a few  contemporary women artists none of whom are very attention grabbing.

This book is a condensed diary for Monica Sjoo, presented after a useful introduction about her life and work's contribution to art, feminism and Godess worship, so that it takes a sort of headlong rush through her life. After a while I really liked this dash through the years as I came across lots of names I knew and events I had been to and the whole era was evoked with all the earnest and
changing enthusiasms of youth. I found I was in 1982 at the demonstration against the US at Greenham 'Embrace the base' in which Monica Sjoo was also participating. 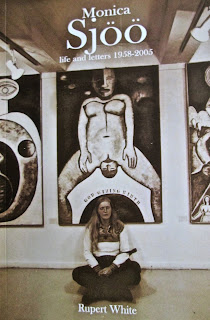 It is clear that Monica Sjoo found her kind of feminist spiritual belief must be linked with political action. She was very keen on ecology, leftwing trends, anti war protest and her own bisexuality.
She put a lot of energy into exhibiting widely and going to speak in several different countries.
Somehow she endured through the grief of the death of two of her three sons when they were quite young, killed one by a car hitting him and one by cancer. She then went onto suffer herself from cancer but went on contributing to events indomitably.
I do not particularly like Monica Sjoo's art in its highly stylised form, strangely similar in some ways  to socialist realism say in Diego Riviera's murals, but with a love of Neolithic monuments and belief that there were pre patriarchal religions that revered goddesses. My own feminism rejects idealising a list of the 'feminine' qualities although the idea that once in Crete images of women were worshipped I find an exciting probability that emphasises the cultural construction of patriarchy that came after.
'God giving birth' was an important work by Sjoo, first shown in St.Ives,1970, often seen as controversial and used many times in various publications. Her book, 'The Great Cosmic Mother' was named by Alice Walker as her favourite work of literature and I now want to take it out to read again.
I found out a lot about Sjoo from Rupert White's researches and I ended up respecting her wide ranging work and realising that it amounts to more than I had thought before.
Posted by Mary Fletcher at 06:29 No comments: