Rebecca Warren has the honour of being the first artist to show in the large new gallery at the Tate St Ives until January.
Would Barbara Hepworth approve?

Finding the room dotted with lumpy bumpy glutinous objects reminded me of recently seeing bronzes made in the Bronze Age by the Nuraghic people in Sardinia.
I wasn't reminded of their beautifully made detailed yet simple forms of warriors and boats that are displayed so well in Caglieri archaeological museum, but of the crass, badly made feeble approximations offered in the museum shop. 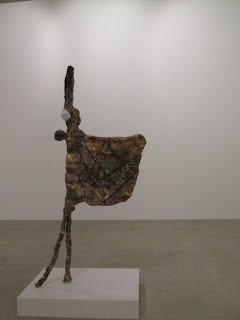 Some of Rebecca Warren's work looks as if she took a Giacometti and dipped it repeatedly into glue.

Other work is precarious looking, bolted into the floor and its solid bronze construction covered in thick lumpy paint. 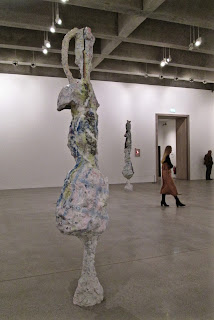 I asked a young woman attendant how the artist can afford to use large quantities of bronze and was told it wasn't that expensive, which is not my experience when enquiring about casting a small dancer I made first in clay. To be sure this artist hasn't got any complex undercut forms so the molds could be easy to construct but the sheer quantity of metal would cost quite a lot.

The attendant also told me that the 'snowman with twig and pompom' presented on a wheeled platform and made of unfired clay was included by Laura Smith the curator to show how Rebecca Warren felt oppressed by unhelpful tutors at college. Unfortunately the label indicates nothing of this and word of this being an object of outrageous incompetence lacking all merit had already reached me via one of St.Ives gallery owners.

The gallery ceiling, quite a complicated construction with many small lights, had already impressed me as interesting and really more enticing than the sculptures. The size of the room is marvellous, although sadly acoustically it's as boomy and difficult to speak and be heard in as the other rooms with only the small carpeted shoes-off space by the cafe offering hope to musicians and speakers or film makers. The largely blank walls make a great background for photos of people, bringing out the subtle variety of their shapes in contrast to the sculpture. 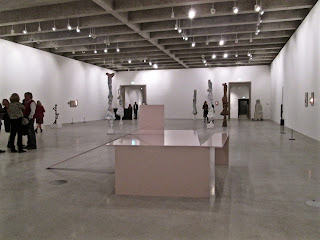 In the Guardian guide it says of these works, 'A slobbering, molten carnality pervades everything this gutsy artist makes.'
I certainly agree with the first two adjectives.
I can't see Hepworth thinking it's a fitting exhibition to follow her heritage. It is the opposite of her work in its blobby bulbous messiness  but then who to suggest would have been better?


There must be work out there in three dimensions by a woman, Cornelia Parker? but we have seen a lot of her. As so often I am left wondering how the artist has received such recognition and why and believing surely that there is more lively, relevant and surprising sculpture waiting for an opportunity. Please. 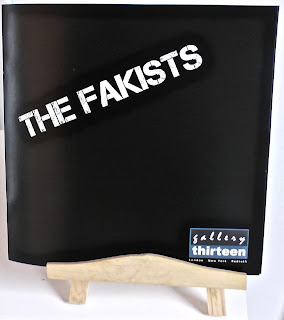 I missed the opening of FAKE ART as I was away being an artist in residence in Sardinia, and I approached the building hopeful but a bit nervous in case some of my contributions had not been included.
Luckily they were all there apart from some 'colour in your own Braque'  sheets, but my own colouring in of my own copy of a Braque was there, considerably lighter and brighter than the somber rich tones Braque had used. I had drawn from the original when it was in Tate St.Ives because I loved the painting and wanted to possess it but had not referred later to the actual colours. 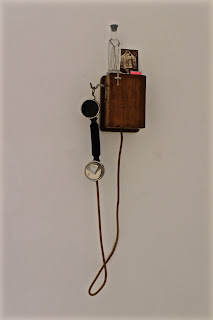 There were many different approaches to fake art in this mixed show, curated by David Axtell and being his choice of theme. He had several things in and my favourite was a hotline to God using an ancient telephone.

He also had a fur coat embellished with false nails etc. which  was all about the false additions some women use to add to their bodies.

I knew these were his but most of the work had no names on and the catalogue, of the international  Gallery 13 ,  London New York and Redruth , had no indication who had done what although  there were photos and names of the artists. This all fitted in with the fakery of other artist's work but makes the attributions rather dodgy.

There was one completely fictitious artist, a French woman with the name of Moser, an identity used by Ron Ford to enable him to make a change from his usual concentration on landscapes.

It was a show where a good grounding in art history and contemporary art made the jokey references more appealing but there was information about the first artists discreetly placed to inform the incognescenti. Some of it could on occasion be spoof info.

Tracey Emin's bed was recreated using photocopies by Jaqui Orly. This brought to mind how much art we only know via print media or online. In a way installations were a way of insisting that you make the effort to get firsthand experience of work, similarly performance art requires your presence. The  development of film, tv and video are I think our version of the medieval cathedral, a vast arena of imagery, largely made by people whose identity escapes us.

There was a room with female emphasis and a spiritual room where my underlit Cretan goddess looked very mysterious under a Rothko which had been made based on research into his methods. 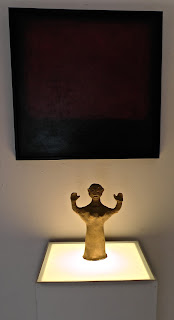 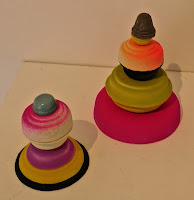 Alongside were some glowingly coloured sort of Buddhist temple forms , part of Alice Mahoney's work.

Stuart  Blackmore had used the words 'real deal' repeatedly and also made an amusing series of collaged images of the artists, photographed by Alice Mahoney, stealing an idea by having paper bag masks and using all sorts of background locations and a current ubiquitous Trump and fake news image. Jaqui Orly had chosen to hide her head behind a dog, which reminded me of her performance in a previous show in which her head was hidden, and of the many art performances I have seen where the heads of the performers are enveloped in bread etc. It seems to be almost de rigueur in performance art, whether to make the performer feel more free or just to confuse the audience?

Tim Pryke had copied a Van Gogh which was one of his very lively drawings using many sorts of marks. He also had documentation in the form of letters from Vincent to his brother Theo. 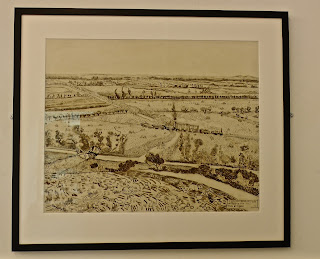 There was a jigsaw of a painting  by Sam Basset which you could take up and put together, and another jigsaw of Angelica by Ingres, with the woman freed from her eternal wait for rescue by Rugiero. I had made this in the 80's as a feminist piece.
I also showed a lithograph done years before Willie Barns Graham had done a similar one and speculated about whether she had seen mine. When I was studying art history at Nottingham University so much of it concerned influences, from whom, on whom and finding if dates indicated who was first.

David Axtell had obtained a Duchamp bottle rack which would make him rich if only it had been signed, and had produced a Picasso dove that might still buy him a house if he ever takes to criminal forgery. 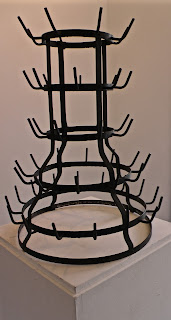 The result of looking around all these most enjoyable fakes, some produced by accidental subconscious knowledge or simply doing work in a similar way to someone else, some produced by careful reference to the original either to learn from it or to see if it could be faked, was to gently raise all sorts of issues.
Why is the first version the best?
Are the 'cover versions', a term used by Danny Fox in  a recent talk in St.Ives about his own versions from Gauguin, tributes, developments, avant garde gambits as described by Griselda Pollock, or failure to be original?

Work ranged from an Egyptian  BC anonymous monkey vessel, through to copying a living painter, who it turned out wanted the jigsaw to be destroyed after the show, feeling the need to assert his identity. 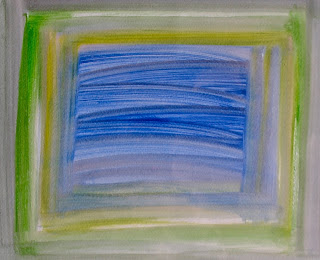 and  made me think about his obsessive border making in a psychotherapeutic way as I have been an art therapist, to trying to make  accurate copies of either the  way an artist worked or to copy an actual work exactly.

The repetitious aspect of many artists' work seems to me to often mean they are stuck in habits, either because that habit sells or because they have a psychological stuckness or simply have become crafts workers without the imagination or urge to strike out in new ways, but it seems to be seen as evidence of making a successful recognisable style by dealers and buyers who are often uneasy as artists develop. However artists seen now as great innovators were able to change repeatedly as we see in Picasso and in music the Beatles.

Writers sometimes write books in different genres under different names so why not artists seeking to free themselves from narrow confines?

Visitors were taking a long time to examine everything perhaps because of the uncertainties about the identities of the artists and the degrees of fakeness involved. There were a lot of things to see.

As the bbc programme about fakes shows the monetary value of works of art hinges on correct attributions but in this show everything was fake to some extent.
Two pieces by two different artists used fake bank notes.

Fake Art turned out to be a playful fun fair of cross references and illusions, thought provoking and enjoyed by those that sought it out. 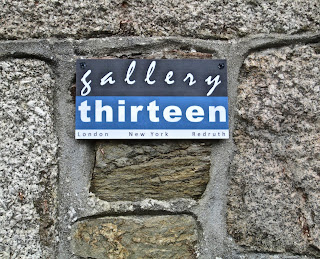 I look forward to the New York and London versions.

Posted by Mary Fletcher at 04:22 No comments:

Posted by Mary Fletcher at 03:22 No comments:

Posted by Mary Fletcher at 03:18 No comments: