Fred McVittie made a proposal to have this theme for a show and there were several weeks beforehand when cmr members could go into the building in Redruth, Cornwall, and be in residence to work on it.
Fred had given a talk about the idea for cmr. He and Mary Fletcher and Jacqui Orly arranged to go at the same time on some Mondays so there was some discussion and working alongside one another and I found it helpful to focus whilst there and to also continue ideas in my studio.

Stuart Blackmore had volunteered to curate and put in a lot of work. He and I both learnt that communication over this was best done by phone not e-mail and that the boundaries of how curating is to be done would be best agreed at the start of a group show.

Alice Mahoney ably put together and produced a booklet showing images and words from each of the ten artists involved which in retrospect needed more time to be available to buy during the show but will be afterwards. Since the show was only on Friday evening and Sat and Sun this documentation is especially valuable.

Personally I would have liked our names on the poster, and posters to be available for members to put up to invite visitors from Redruth and elsewhere. There was online publicity and on source fm radio and I sent something to especially local paper in St.Ives. The Echo,  about my part in it, which was printed and had everyone’s names.

The names of artists by the work and titles, and the handouts about it were rather discreet to the point of being difficult to locate and the instructions for my participatory anti bullfight postcards to take and insert in postcard racks in Spain were printed in a font so tiny that a magnifying glass could have helped. The idea of selling work was mentioned as a possible line in the handouts but I did not see any reference to it . All these facets of showing work were not discussed by the group and I think we could benefit from doing this.
What are the reasons for keeping publicity mostly to the cognoscenti, playing down sales opportunities and minimising use of the artists' names? Is it de rigueur in  alternative art anti commercial circles to be so carefully good taste about this? Is there a nervousness that the local population might be a problem if we succeeded in attracting the in ?

However, the show looked well presented, sharing preview night with Back Lane West residency brought in more people I think and a lively sense of walking up and down to visit both shows. It became a parallel world just behind the Redruth's thoroughfare.

139 visitors were recorded over the three days.

Other works were on video. Alice Mahoney had a complex montage of high end consumerism entitled ‘I’d rather have a lot of shoes and bags than having animals’.

Stuart Blackmore showed the frustration of a tangled Newton's cradle. He had also made the entrance to the show dramatically dark with flashing words in lights. Mary Fletcher had caught two pigeons in mating behaviour on the wall at the back of cmr, which seemed to invite the audience to identify with them and aptly fitted the theme.
Her other work included a subversion of the show's title by adding 'NOT' in red with a red wedge recalling 1917 Russian revolution art, a drawing recalling her abandoned suicide attempt as a young woman when struck by tragedy and grief, her anti bull fighting piece and two images about the refugee crisis. She had a list of 'positive verbs for action in the world' which was a new take on Serra's verbs for action which applied to his work in sculpture

Fred McVittie had been out on the hillside as a scientist despairingly arriving from a great distance away to hold up a misspelt sign about the state of everything, which coinciding with the title of the show was not a surprise but brought over a desperate, sad appeal to the unknown watchers.
Also he had transformed himself into a swastika as which he impotently struggled to be able to move or to be terrifying in an inadequate space. The tv monitor was set in a dolls house reduced scale domestic interior which I think made the piece, with a hint from its title, about the absurd horrors of domestic violence.
Fred also had some embroidered baseball caps, such as 'make America good again' and' make Redruth great again'.
I was a bit disappointed to find the Trump substitute grunting pig I had seen when I had been in residence there earlier had been edited out, but a whole wall of collaged cuttings and ideas gave some idea of the range of peoples' sources. 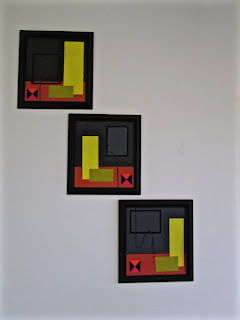 The Solution to “Brexit” explained with rope,
1.CTRL[and Seize the means of Production]
2. ALT [Ownership of Land and Property]
3. DEL [Any Remaining Framework Allowing Existence of the Bourgeoisie}

David Axtell had a range of collages and montaged puns and comments referencing, viagra,
Trump and Farage and other things including a rewriting in less optimistic mode of a work from Yoko Ono.

Liam Jolly had a mystifying combination of curved and straight bananas with a canvas representation of a computer screen and a website address reference that needed technology to make sense of.

Tim Prykke had altered two chairs so that they would only function where they were placed and made some eloquently absurd photographs using bricks, grapes, eggs and concrete which seemed to be metaphors for impossible situations.

Jonathan Hayter had a whole room installation and used fluorescent paint and ultra violet lighting to great effect so that his expressionist anguished imagery using images of war, of religion and phallic sculpture made a powerful glowing experience once you committed to going through the curtain to be immersed in it.

I think the show was lively and left people with memories and images that might embody something of our difficult  times and showed artists grappling with how to express some things that were questioning and painful.

Please keep in touch with CMR, the artists's collective in Redruth, for information about future shows.