In the Dark Times - cmr - Redruth. December 2012
Members of cmr were invited to send in ideas for this show and then to attend a meeting at which those present spoke about their proposals, some of which were as yet very unformed. Following this the curators, Liam Jolly and Duncan Hopkins decided what to show and how and did the work of installing it.
On returning to invigilate I noticed that the rota had not been filled so the show had not been open as advertised, and another time I would suggest participants should be required to commit to this before their art work is accepted.
The temperature in the building was very chilly even after the two inadequate heaters had been on for several hours.
These practical matters are very important for the professional production of shows that people will bother to come to see and be happy to spend some time looking at. Interestingly there was no provisions for buying work,such as receipts etc. although some works were priced on the list provided. 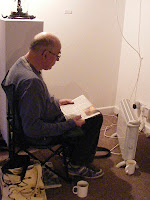 As the work was installed with nowhere separated off for the invigilators to sit, we became part of the installation, two people in camp chairs, holding onto our warming cups of tea, sitting close to the heater, like two bivouacing squatters in the semi darkness, waiting for someone to come in.

At the entrance there was a shiny paper grotto to walk through which reminded some of one there used to be in a department store in Redruth. However this one contained a framed print that said 'Bomb the world', by Stuart J.Blackmore. 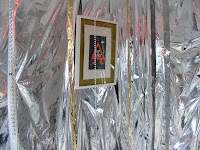 This encapsulated the contrasts of the show. 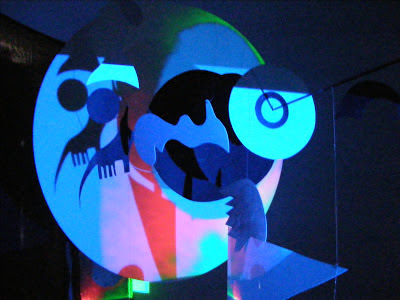 Jonathan Hayter's light show was a delightful visual ballet of shapes and colours, like being able to walk into a Bryan Wynter 'Imoos'.
In another room a dramatically lit mud-covered book lay on top of bundles of twigs. I didn't know what it meant. More mud books by Francesca Owen hung from a ceiling and Peter Ward showed bundles of sticks recalling a set for babes in the wood or red riding hood. 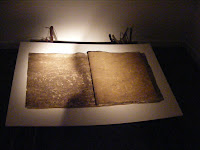 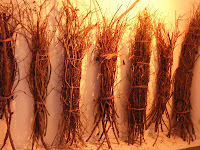 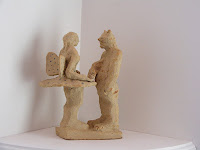 There was more about fairy tales and masks, dressing up - picked up in my ceramic figures of a New Year Bear talking to a Fairy.
Alice Mahoney showed a rather creepy torn part of a toy bear and kit for a bear tamer. 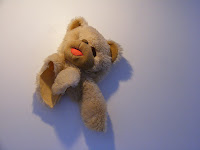 Ilke Cinarel’s video combining a naked man sitting on a toilet with images of children and their voices seemed similarly to hint at something unwholesome whilst recalling 60's graphics, Hockney, ‘found film’ on The Old Grey Whistle Test on t.v.? 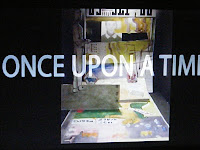 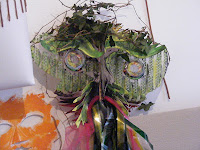 and I had invited the public to send in baubles expressing how they felt about Christmas, which resulted in a small but unusual and varied display and raised the issue of how we react to being in the grip of our culture and gained useful publicity in the local papers for the whole show. I was able to put inside a bauble shape my poem about being a humanist “It’s our Christmas Too”. 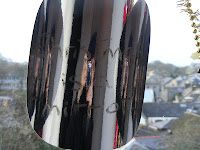 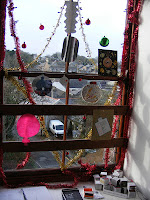 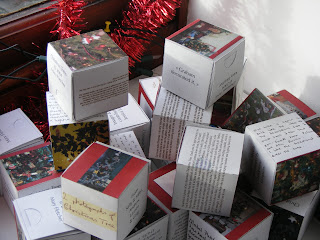 I also showed a previous collaborative piece in which people contributed Xmas tree pictures and words about their use of this custom. These had been made into bauble-like cubes to examine and re-arrange.


Duncan Hopkins had a painting in which a dark figure was behind colourful streamers. Towards the end of the show, following some unexplained bother, this was replaced by Charmaine Honeychurch's thickly painted “Calm after the storm”, the title of which may have referred to this event obliquely, which used gloriously gestural thick paint in a wintry palette. 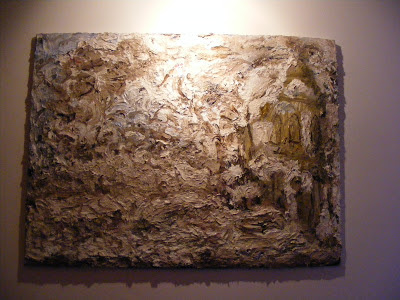 Ron Ford also had a whole wall of wintry and autumnal landscape modules showing his studies of the Gorran Gorras area, painted very dry and sparse and glowing attractively in the dim light. 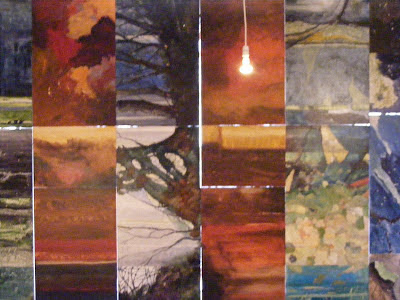 Jayne Anita Smith had also used a mask and a strange masked figure in her paintings and sculpture, the latter shown under one of those domed glass covers that clocks sometimes have. Her paintings were small and benefitted from being shown with plenty of space around them. 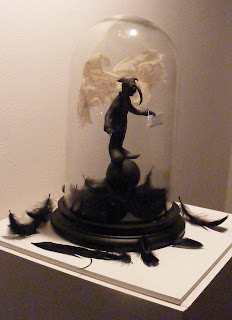 “In the Dark Times” was a show swiftly put together and showed the way in which this artists’ group can be fairly spontaneous and show a variety of work that has not had to go through the many hoops that often intervene when artists make applications. Some of the work may be a beginning rather than the resolved result of long study, but it’s still interesting to see it. The curators had produced a well exhibited show, giving care and respect to each art work.
CMR is building a reputation for having something current and unusual to offer, worth being aware of in the sense that whilst at Falmouth on the MA course I heard people say that Redruth was the new St.Ives.
Posted by Mary Fletcher at 06:13 No comments:

Rothko Scribbler does not deserve 2 years in prison-petition

Dear Theresa May, [I await her reply]

Vladimir Umanets has been jailed for 2 years for scribbling on a Rothko.
This is crazy.

I ask for his sentence to be reduced. Someone who knows how to start a petition should start one.

People should only be imprisoned for violent crime. I am an artist and I appreciate Rothko but to take 2 years of a man's life is utterly ridiculous.

A fine and community service would have sufficed.

The Guardian published my letter about this on Sat 15th December 2012.
By then I had managed to start an online petition, the link to which is at the start of this post.

There have been some signatures but I would like to see more people join this protest against jailing a man for defacing property.

Its depressing that so few will commit themselves to the slightest involvement in any campaigns-you'd think we were living in some fascist state and in danger of being killed if we even speak our minds-for example so few who read 'art cornwall' forum ever express an opinion-is this because they fear ridicule or because they have no opinion?
As Bettelheim pointed out, in far more terrible circumstances than I hope to endure, if one delays protest then protest becomes more difficult.