A Childhood with the Surrealists Falmouth Art Gallery

[ ends 3rd March ]
As one might expect from the title this is a show of unusual things which invite close inspection and are often witty. Anthony Penrose and Andrew Lanyon have collaborated and it contains many of their intriguing works. There is a wonderful photograph taken by Lee Miller of Henry Moore looking at the people gathered in the London underground tunnel to sleep there and be safe from enemy bombs  during World War Two.
However, what makes Falmouth Art Gallery [above the library] so unusual is the inclusion of work by children, which has usually been done at the gallery. While I was there a noisy enthusiastic group were painting in the next room and we could inspect their paintings which were laid out to dry on the floor. When the Tate in St.Ives opened we used to have a class there in which adults painted, using the studio space where the information room is now. We would take our work and put it on the floor in the curved gallery .Happy days, long gone, in which direct influence from the art on show to the artists in the class was a visible reality.
There is a work by a child of three in this Falmouth show and several by older ones, which clearly show us why Picasso and others admired the spontaneity of children and tried to get this in their own work. In this case there is a Picasso print on the same wall 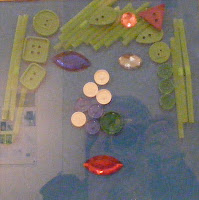 The Chinese Circus,         Truro Hall for Cornwall - matinee
So beautifully done, so exuberant, energetic and young. As it starts I want to cry because of their blithe courage.
The clown - all in yellow, is very much less threatening than clowns often are. He throws popcorn over a man’s head in the front row and he gets four men from the audience up on stage to do a stunt where they sit on stools and then lie back on each other’s laps and the clown removes the stools and they remain, supporting one another. He’s impish and cheerful.

There’s a lot of leaping, acrobatics, women spinning eight plates each on sticks, women on bicycles, a woman en pointe on a man’s head, a man on a bed of nails with a paving stone on his chest cracked with a blow from a huge hammer, two men sword fighting, women drumming, women musicians playing frantically, clever lighting, a giant yin yang symbol, and the men with hats, on and off and exchanged, amusing and charming. It’s an absolute treat.
There’s a lot of red and glitter, men dressed as lions tossing their manes.


The audience is intent, excited, all ages, children with those flashing light wheels and sticks and all united clapping to the music at the end as the young company, equals rather than stars and others, clap with us. Two hours of skill and delight in it and we go out into the evening wishing we could do that too, but at least part of it, and they repeat it all at 7.30. 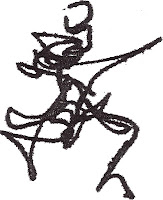 I did some drawings in the dark.
Posted by Mary Fletcher at 02:31 1 comment:

There’s quite a lot to see at this show especially if you watch all 4 videos and ask the helpful attendants a couple of questions. I was there two hours to my surprise as at the private view I wasn’t impressed by what look like stage sets. Everything has rather a lot of work in it and the nicely produced book about the artist published by Tate has additional projects not in this show and can be read in the information room.

As I went in the man at the ticket desk asked if I was aware of the ‘adult nature’ of some of the work and I was very tempted to reply, ‘I’d call it adolescent’. Nevertheless, I liked the first room with a child’s eye view of huge phallic lighthouses taken from Wallis, whose small works are delightfully displayed for us to see anew.

The gay bar in Spain with a tiny reference to Franco is o.k., but I wish we could walk into it. Why an earth did his parents select Franco’s Spain for a place to settle?

I’m aware of many women artists who’ve explored autobiographical content, Kahlo, Kelly, Bourgeois, Calle, Emin and many many more from the 80’s, but here’s a man doing this, although including deliberate fictional mystification which I find less interesting than aiming at truth.

It’s great that he’s included work by women, but less great that he gives no credit on the wall to Cathy de Monchaux, Mona Hatoum, Barbara Hepworth, Andrea Fraser and Sarah Lucas [hers is the deadly dull sausage and banana eating video] and in his piece doesn’t name his ‘cello teacher. Bacon and Heron aren’t named either but the public are more likely to know of them already.

His videos are what I like most. I can sort of believe seeing the freedom of Patrick Heron’s stripey job helped the boy Simon feel able to realise it could be o.k. to be gay. I love his joke about performance art -’ How many performance artists does it take to change a light bulb? I don’t know, I left befiore the end’ Did Patrick Heron ever refer to Lacan? It’s a bit absurd to refer to St.Ives in 1981 as ‘a fishing village’ where art magazines hadn’t reached, but presumably that’s part of the joke about reality and myth.

It’s in the video about smashing the Leach pots, a cleverly sensitive subject for St.Ives, and for a half Japanese artist now modishly ‘Berlin based’ that Simon says you can try to deal with such things as his relationship with his father symbolically, but that it doesn’t work. This is the one place in the show where I felt the artist was speaking straight from the heart. I felt that he knows about psychology but that if he wanted to encounter a therapist as an equal rather than use actors under his own direction he might find a way of using symbols to really embody his feelings and help him in a more enlivening way.

In the last room Simon Fujiwara toys with the politics of Mexico with reference to Cortez and to himself as a patronising tourist, writing letters to Europe, which are decipherable if you read them out. It’s obscurely and very tentatively done.

I’ve missed out the Mexican Saint Simon, paradoxically a figure with arms too short to be able to play with himself with whom the artist identifies by making the face his own.

I think there’s a lot of work on these general lines being done on MA courses all over the U.K., maybe all over the world, but somehow Fujiwara has the spotlight on him and all this space to put his work. This aspect of his autobiography, how did he come to get his work here? is the one that interests me most but is not addressed. One of the attendants points out S.F. ‘ticks a lot of boxes’ for being mixed race, living in Berlin, being homosexual even. Is that a box ticker? There’s no mention of all his peers. In the video where he speaks directly to us, Simon comes over as very likeable and unsnooty.He’s trying to say stuff that matters and refers to stuff outside the art world and he seems to work hard so I give him credit although there’s the usual sour grapes that I do some autobiographical work with a lot more direct connection to people, about murder, grief, death and infertility, which can be seen on axisweb but then I’m just in need of a box-ticker’s apprenticeship.

As Simon Fujiwara prefers to play with reality rather than directly express it I want to tell you about his sister, still living in Carbis Bay, with no chance so far to get her own art shown anywhere beyond her own front room.

Posted by Mary Fletcher at 12:24 No comments: