Grace Pailthorpe and Reuben Mednikoff 'A tale of Mother's Bones.'

Grace Pailthorpe and Reuben Mednikoff 'A tale of Mother's Bones.'


The Exchange part of this show had a recording of Pailthorpe explaining in detail one of Mednikoff's paintings using Freudian and Kleinian ideas of everything relating to his experience as a baby, his earliest supposed feelings about his mother, his faeces etc.


She speaks with remarkable certainty about the meaning of each element of the picture - I suppose based on prolonged therapeutic discussions with the artist, 23 years younger, with whom she shared her life.

Pailthorpe and Mednikoff had a long relationship and were unusual people and artists, seeking to understand themselves and the havoc of World War Two and fascism and to use art to help people in general.


Both artists' works have similarities and use figurative surreal imagery, sometimes black and white lino cuts,


otherwise rather delicately detailed paintings in which breasts and phallic symbols, mountains and animals make a whole narrative world on which they made detailed notes from their psychological perspective.


They had the large ambition to understand the roots of fascism, seeing it as stemming from an immature inability to share the good things in life, like an incoherent unconscious infantile jealousy and fear of the baby losing its food. I know from reading Alice Miller that child rearing pratices in the early twentieth century were often harsh and threatening - depriving children of warmth and affection. It is thought that Hitler was subjected to cruelty which resulted in him developing a self protecting armour and unleashing his early repressed rage with terrible consequences.
Grace Pailthorpe also suffered a lot as a child in a bleak Plymouth Brethren household.

I enjoyed the show's two parts much more than I thought I would and was told many visitors said that. There was quite a bit to read but the liveliness and colour of the paintings and the attractive way they were displayed in blocks, sometimes on different strongly coloured wall areas, made the experience enjoyable. It made me want to share a meal and talk with these two people.
The catalogue looked fascinating and had sold out. 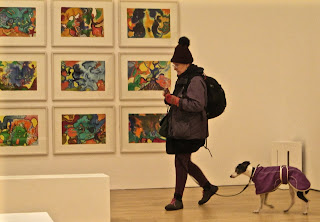 There had been some contact with the French surrealists and on a Canadian radio broadcast, which visitors could listen to in the gallery, Pailthorpe was described as the most important English Surrealist - but in reference books on surrealism Pailthorpe is rarely mentioned. The pair used surrealist methods such as spontaneous working to reach the unconscious.

At Newlyn the visitor was invited to try a two minute doodle with materials provided or to add to a book of drawings with three interchangeable parts - one of the surrealists' games.


This show made me regard the two artists with respect, reconsider the benefits of surreal experimentation, remember the power of art therapy and enjoy interacting with these works.


( Mary Fletcher worked for a time as an art therapist with adults with mental health difficulties)
Posted by Mary Fletcher at 06:42

Email ThisBlogThis!Share to TwitterShare to FacebookShare to Pinterest
Labels: Exchange and Newlyn galleries, fascism, Pailthorpe and Mednikoff, surrealism in UK