I thought of writing about this as a cultural event but as a convinced leftwing socialist, the happiest I've ever been with our Labour party now Jeremy Corbyn is our leader, and desperately hoping for a Labour government and to Remain in the European Union, I am hardly a dispassionate observer.

It's a bit like a rock concert - tickets are free and sell out online in an hour. We have to queue to get in and our bags are searched. Red paper bands are put around our wrists. Some turn up without tickets and some manage to blag their way in whilst others remain in the building unable to enter or hear what's happening. There's rock music before and at some other points. There are only a few seats - people are standing, some with drinks from the bar- some with tiny children on their shoulders, many holding up mobile phones to take photos and video and probably post to social media.
I run into friends and one takes a selfie of us on which I notice I look really happy.

There's a build up, the local candidates speak first - Jenni Forbes very bright and heart warming, Paul Farmer fervent and amusing by turns and looking attractive in a three piece suit and Cornish tartan tie. He speaks some Cornish as he begins. He recalls our famous inventor Trevithick who designed the first steam engine. He looks forward to future inventors who will save us from climate change disasters.

Then it's Angela Rayner, 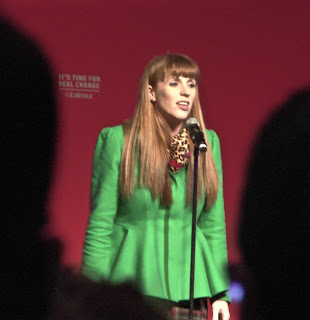 Glamourous with golden red long hair and a bright green jacket, waving her arms about - shadow education minister - full of beans, smiling. At times there's a pantomime atmosphere with the crowd responding, singing the well known refrain 'Oh Jeremy Corbyn' with love and hope in their hearts or shouting that our National Health Service is 'Not for sale' ie not to the US President Trump.

You can speak to anyone. There are hundreds of Labour people, the atmosphere is electric and warm. One dissenting male grumbler is heard briefly, swamped by the general wild enthusiasm. Many of us are activists, people who tramp round leafleting and canvassing, workers - and it's so nice to be in celebratory mood as if we really will win the election, transform our country for the better, save the world from climate change. We deserve this break from toil to be recharged.

Then it's the star of the show, 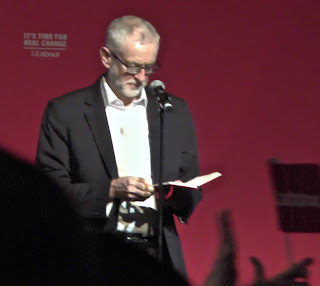 Jeremy Corbyn - surprisingly as fresh as a daisy, humorous, honest and true, hopeful and engaging, 70 years old but fuelled with his ardour for the cause, for making life better for the many not the few. He speaks very well, at ease, fluent, energetic and inspiring.

Labour flags are waving, people are signed up for helping. Surprisingly no fund raising buckets are rattled.

Then it's over, we're out into the rain, finding our comradely lifts home, pleased we came, glowing with hope. It feels like midnight but it's only just after eight. A memorable evening, something that we'll always remember, making sense and meaning of our lives whether we win or lose - trying , co-operating together for the future. Not alienated, passive and despondent but united in a glorious vision of what could be.
Posted by Mary Fletcher at 07:01 No comments:

'Protected by Alarms' St.Ives exhibition in an old house by Anima Mundi Gallery.

'Protected by Alarms'. Anima Mundi at the buildings opposite their gallery in Street an Pol
Oct - mid November, Tues to Sat , 11-4 daily, free admission.

Lesley Hale, who is involved with the project to invest in community housing in the building that is being used for this show had the very bright idea of suggesting it to Joseph Clatke of Anima Mundi and he has taken the opportunity to show 19 of his stable of artists in this very alternative place, a delapidated building.
Lesley has largely been left with the unpaid invigilation in the hopes of raising interest and funds for the housing project.


I went up to the top of the house first. There was a black and white film showing by Mark Jenkin called 'Bronco's House'. Unfortunately the duration was not printed on the catalogue list, which was hard to read in dim lighting in its pale grey tiny font. Other visitors told me the film had the same style as Jenkin's recently acclaimed 'Bait'. It was rather slow moving and brooding with no smiles but had a compelling atmosphere of probable tragedy as a pregnant woman and her partner sought to reclaim a stone built house somewhere near Newlyn. However, not knowing how long I was in for I left before the end, later finding out its 44 minutes.


There was a hole in the shutters through which I saw the surprising view of Smeaton's Pier, surprising because, disorientated by my walk up the staircases, I had not expected to see this. I thought it was a pity this experience was not consciously incorporated into the show but maybe most people saw it. It made me think of how lovely it might be to live in the building once it is renovated and available as affordable housing.


The nineteen artists had not in fact responded to the space or to the housing issue but the curator had chosen to exhibit works that fitted some possibly political or social agenda to some extent.


The most starkly current was a large painting by Paul Benney 'Grenfel Tower (the sleep of reason)' which was said to encorporate ash from the tragic fire that destroyed the block of flats due to it being clad with highly flammable material. This painting was lit from the floor and looked dramatic and moving.


Equally dramatic was Tim Shaw's 'Parliament' which was a room full of ragged threatening looking rooks, plumage fluttering in the breeze from an open window, with a chattering soundtrack. An obvious satirical swipe.


Carlos Zapata had a sad tall wooden figure holding a tiny piece of inhabited land in his hand. It was made more effective by being shown in a small dimly lit room, all the more poignant.


Then there was a surprising embroidered banner, gorgeously colourful and crisscrossed with political remarks such as, 'It's been ingrained into my very being that the Tories are the embodiment of pure human evil.' The artist was Henry Hussey, whose solo show at Anima Mundi was about to open.


There was a lot more and prices available at Anima Mundi.


St.Ives is used to good taste and seascapes so this show was a delight.
Anima Mundi is the sort of expensive gallery that can intimidate people who don't feel part of the art world but by crossing the road and being alternative I think Joseph Clarke is to be congratulated on opening up a way in for those who dare to enter for an art adventure that will make them think.
Posted by Mary Fletcher at 06:56 No comments:


The paintings are boldly outlined pop art style images, easily recognised with flat contrasting colours. They are unusual at the moment especially in Penzance - not evoking the atmospheric landscape, not gestural or abstract, not lusciously painterly.


There's a portrait of his wife Nicole, very like her despite its simplifications - arresting in its impact. 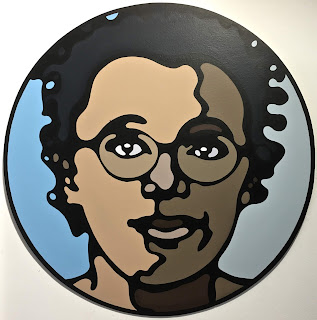 There's a tin of mackerel on a plate, a lifeboat, an upended car and some guns. 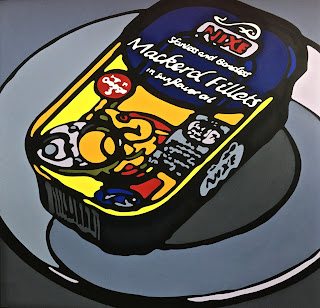 On referring to the list of works, priced £900 to £1,400, I find out the mackerel refers humorously to the popular William Scott image in the Tate of mackerel not in a tin. The car refers to the child abuser Jimmy Saville's car, a man said in the provided note to be a spiritual adviser of the Prince of Wales.
The gun refers to one used by a white racist who killed 9 African Americans in Carolina and the gun  is said to have been his birthday present. 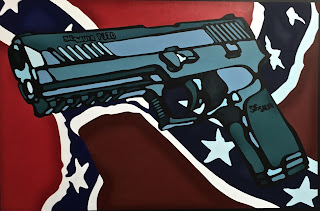 So I learn that the artist is politically engaged, that his pictures have meaningful references - but without the notes I wouldn't have got these references. Without the notes these are paintings that might be glamourising the gun, just picturing a car crash, illustrating a tin of fish and portraying a woman's face.


It's a problem - how to make comments on issues through art. It's difficult. This artist paints confidently and makes an impact but the actual images do not convey the ideas that motivate him and which he documents to make the viewer aware of them. Is this ok?


Banksy manages to get the whole message over in the image.
Maybe Aaron doesn't want to do this, wants the first impact and then sometimes a second meaning from reading about it.
Posted by Mary Fletcher at 06:37 No comments: