‘Skirts of Hope' - Sewing with Purpose.

I hadn't sewn anything for about fifty years but I was drawn somehow to this group via a Facebook
post from 'Doing what we can'.

The idea about the skirts came from some post WW2 activity that women began in Belgium.
This recent incarnation of it is in Penzance, Cornwall, UK. So far all women, a dozen or so meet
in a hall or this time in the open air bandstand in the attractive Morrab gardens. 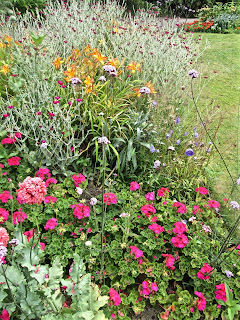 Three hours sitting in a circle sewing, using appliqué or embroidery, everyone absorbed in making
something meaningful and personal. Some are using inspiring quotations, some utilise fabric that
has significant memories for them.

Whilst working one or two women have brought poetry by themselves or poets they admire, to read
to everyone, which is enjoyable. Otherwise there is all sorts of companionable chat. 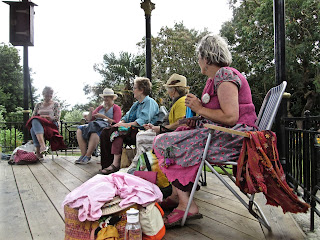 One woman has come prepared to tell us about an organisation she is involved in, the
Extinction Rebellion movement that recently held large demonstrations in London to raise
awareness of the crisis of climate change. It seems a town nearby has 150 members and regular
meetings at which 40 are likely to attend. One of their objectives is to use a technique used in
Ireland which resulted in abortions being legalised. This is 'citizens' assemblies'. It's not quite clear
how these are selected. It sounds as if the climate change concerns are provoking a new wave of
involvement in communities.

The whole event is peaceable but despite its hippy look, or maybe even because of it, also
teetering on the edge of rebellious action.

The previous meeting had tea and cake and also a more spiritual dip into a guided fantasy started
with a Buddhist brass bowl sound produced by an implement passed round it's rim. This time some
cards are randomly selected and read out, all emphasising love and hope.

There's no discussion of what happens or the way it's done, it's like a tradition has been
established by core members and the rest of us fit in with it.

A future exhibition of the 'Skirts of Hope' is mooted. 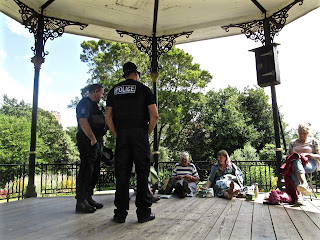 Two policemen arrive, a very rare sight normally, to check us out. Maybe they were out to enforce
the ban on drinking alcohol in the gardens, which I noticed being cheerfully disregarded by two
young men with bottles of beer as I came in. We joke about having dangerous needles and pins
and scissors.

So, are these sorts of gatherings of mostly women meeting all over the world to engage in
therapeutic slow decorative sewing with political and social intent to improve the world?


It's a fascinating phenomenon.
Posted by Mary Fletcher at 06:09 No comments:

This was organised by artist Sovay Berriman via the arts organisation Cultivator, with various
funders including the EU, that meant attendance was free with food and drink also. It was in Redruth, Cornwall, UK.

A local female Cornish speaker, only introduced as Pat, gave a bilingual introduction and then left having made this gesture recognizing Cornwall as a place with an identity separate from England since ancient times. 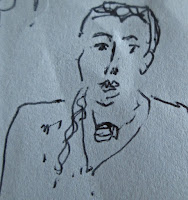 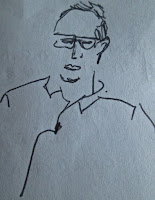 gave short presentations and
after lunch we could choose two workshops with two of them. 3  of the 4 came from outside Cornwall.

Questions about the politics and ethics and practice of community art were raised and
inventively played around with using placards, maps, a fanzine, a card game, inventing a
disastrous project to highlight its opposite desirable features.etc.
.
Conflict was accepted as necessary in society rather than something to avoid it at all costs.

Being old enough to not need a job I didn't share the tortuous need for statistics on age, ethnicity, sexual orientation etc. to satisfy funding providers, but it's instructive to hear how the trends in projects in art are going and how tiresome the hoops for jumping through can be.
What hasn’t been surveyed is whether visitors like or dislike being asked to categorise themselves.

Some were aware that the usual suspects tend to get the work and it might be better to widen the
selection pool. How to do this was uncertain although I suggested using anonymous applications
and selectors from elsewhere that wouldn't recognise the cvs.

The likelihood that only impoverished communities are offered improving projects, often
condescendingly, sometimes by parachuted in strangers was deplored, but the often impoverished artists appreciate any opportunities. They are being encouraged to divert their interests to fit in with current administrators’ interests.

Personally I felt it was good to be seen to be on the scene and feel myself part of a community of
arty people who aren't just trying to sell a commodity to the more affluent in society, even if it's only
replaced by selling their services to the most able art administrators, who are also on the treadmill of pursuing favour.

Why has social engagement become so popular with the authorities, unless its bread and circuses to divert the masses from their austerity burdened exploitation?

These occasions give the organisers employment and the artists enjoy convivial contacts but
I always notice in meetings whose paid to be there because I'm not.
The physical shape of the beginning and end was of a row of paid speakers facing rows of
participants, some of whom, maybe half, were attending as part of their paid roles. I felt a curved
arrangement would be better for feeling more equal even though we are really in very different situations.

Art that is about contemporary life and seeks to involve people is going on despite all the difficulties
and absurdities that accompany it.

Posted by Mary Fletcher at 04:05 No comments:

Andile Dyalvane has been in residence at the Leach Pottery in St.Ives, Cornwall, UK and his work is seen there from. 29 June to 11 August before he returns to South Africa.
He was at the private view, resplendent and expansive,shaking hands with everyone and wearing African looking face paint. 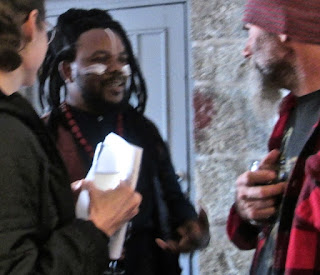 His pots resemble him in being robust and dark with surprising vibrant touches of blue or red. 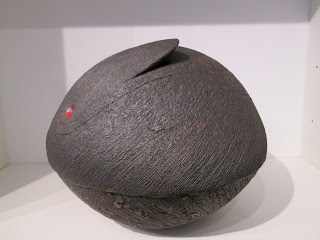 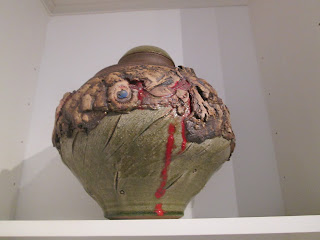 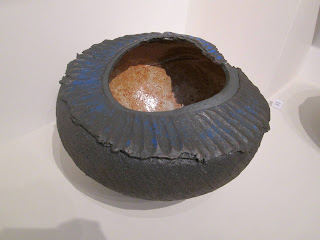 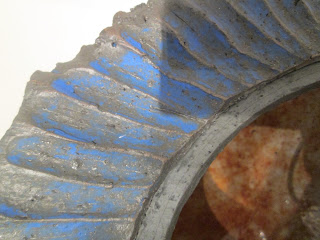 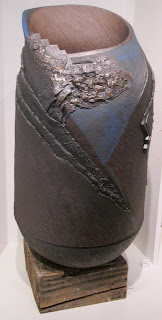 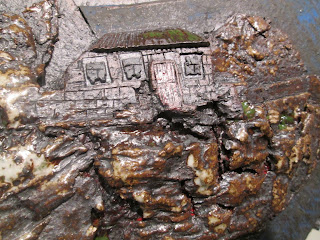 There are frills, cuts, textures, all heavy looking.
Also a surprise were the prices from £350 to over £10,000

Down in the town from 15th June to 19th July there is a Trevor Bell solo show at Anima Mundi the artist having sadly died in 2017 aged 87. 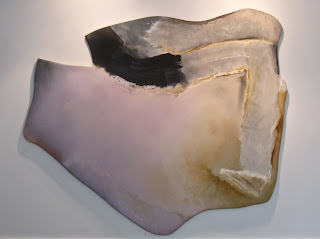 Here the paintings are surprising in not being rectangular. These abstract compositions could be inspired by places or weather or simply from intuitive painting with titles added later. 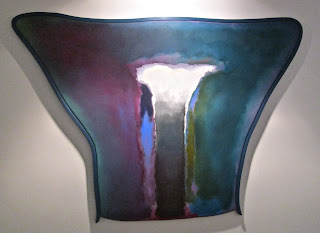 The artist liked purples, greys and sandy yellows with matt surfaces. The gallery assistant tells meTrevor Bell experimented with paper shapes to determine the forms and arrangements. Then canvas is stretched on a wooden framework. 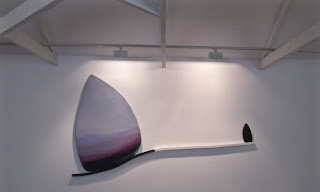 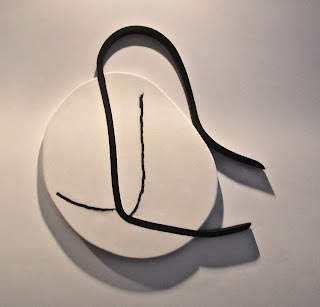 Here also the prices are substantial, from £5,400 to £64,800.The works are large, impressive in the bare gallery spaces.

There is also music by Jamie Mills and dance by Sarah Fairhall and Lois Taylor related to the paintings and shown on video. 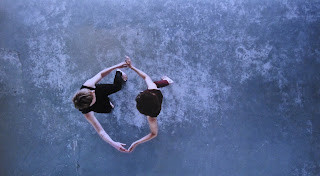 Trevor Bell is one of few painters to reject the rectangle.
I met an ex student of his who claimed to have given his tutor the idea from their own experiments. However, if so, once voiced or shown in art ideas are everyone's and Trevor Bell certainly used this in lively ways right until the end of his career.
Posted by Mary Fletcher at 05:14 No comments: