Three people said to be ashamed of their bodies are sent to stay on a Greek island with a larger
group who are proud of how they look. This supposedly helps the worried 3 accept their bodies
and be happier. By the end the three bare all or almost all and go naked bathing with the confident.
It's interesting and unusual to see an array of naked bodies that don't fit current ideals.

There are a few odd things happening.
Would men and women who have a problem being seen naked really want to be shown without
clothes on tv?
The ashamed and the proud share an obsession with their own bodies.
Each week includes someone whose body looks to have only a slight imperfection such as small
stretch marks or minor areas of impetigo.
Each week one is reported to have gone on to make a business designing lingerie or clothes for
larger figures. Maybe they expected more publicity for this than a brief mention of it with no trade
names?
None of the shy mind repeatedly hugging all and sundry naked.

The confident ones appear at first covered in highly decorative body paint and g strings and later
the shy ones are similarly decorated and applauded. We don’t see who body paints them or discussions of the designs.

Although the program advocates uninhibited nudity some shots show women coyly covering their
breasts and there are few full frontal images.
Women refer to trimming their pubic hair as though to leave it growing would be distasteful.
Each shy one pairs with a non-shy person of the same sex to compare bodies behind towels.
No mention is made of sexual orientations or sexual activity.

It's a mixture of the coy and the flamboyant. There's immense peer pressure to join in parading
about in the nude and a lot of whooping and cheering when this happens.
The shy ones seem genuinely newly delighted with themselves.

One of the unashamed ones has his shoulder and arm missing but we don't find out why.
We do find out a bit more about the nervous ones personal lives.

The attractive black male doctor keeps his clothes on as he talks about research and procedures from a distant location.
The glorious camouflage afforded by body paint or clothing becomes emphasized as we view the
sort of overweight flesh that hasn't been popularly admired since Rubens or the Willendorf Venus.
No one discusses how or why our ideals have evolved or why some people have body dysmorphia
and others are vastly overconfident.

Next week's episode will be virtually a repeat just like all the other many programs with set formats.
I have heard no one discussing the program and wonder if the audience figures could be
revealing?
Has 'Naked Beach' got its heart in the right place or is it voyeuristic pandering to an uneasy


audience?
Posted by Mary Fletcher at 07:32 No comments:

Downstairs Rebecca Chesney has a 3 screen video making a loud roaring sea sound. On the left a
lighthouse, centre an arrow shape , right a buoy with flashing light, seen at various
times of day and night. It makes an impression, the dangers at sea, the immense
power of it, is evoked. 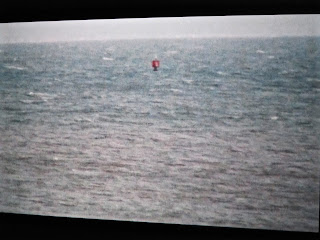 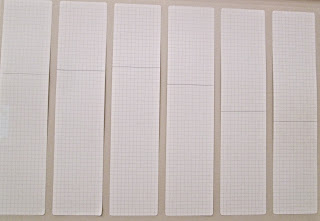 Upstairs she has acres of pencil graphs and screenprints of data that make my heart sink.
They are about deforestation and sea levels I read. 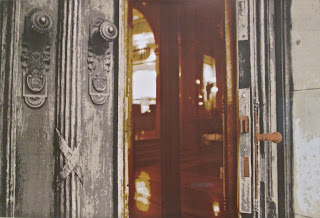 She  has a desk with a map of Zanzibar and cleverly projected video of the sea on the
page of a book. 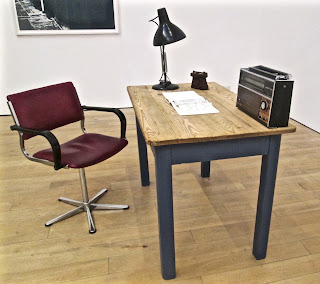 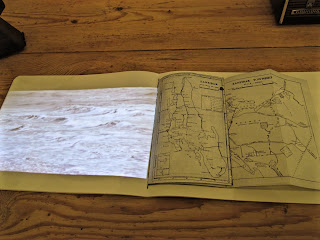 The projector is  secreted within the desk lamp. I got so interested in how
this was done that the why escaped me.

Lubaina Himid shows an old dressing table with paintings inside the drawers. Unusual but
the meanings again were uncertain. 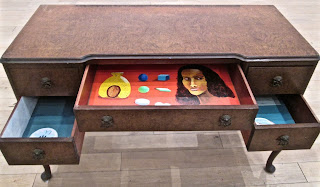 On the stairs she showed a  very small paintings on
zinc of the sea, placed subtly and easily missed, and an abstract painting of rough
coloured overlapping lines. 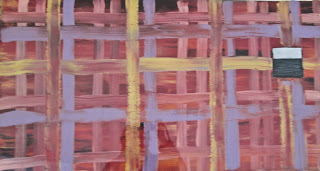 I have heard Lubiana Himid speak interestingly on past projects about images of black
people. I found the book provided about her fascinating.

However, although this show is intriguing up to a point, it's an inconclusive foggy point leaving me
all at sea about if these works say anything in particular put together

The preview was full of people, many of them artists who knew one another, and had a lively buzz which errupted  after an introductory talk.  Dr. Ryya Bread curated the show.

Each work had the writing that inspired it also in the wall, not always exhibited at a good height for reading. Some of the writings were poems by very famous dead poets so that it was a challenge to respond with any visual art that could rival an often well known and loved piece.

The Newlyn Society having lost its original Newlyn Gallery space has found Neil Armstrong's attractive gallery next to his remarkable sculpture park, restaurant, shop and plant stall, is a useful alternative. Members, selected from applicants by a committee, have then to submit their works on a chosen theme for further selection each time the Society mount a show.

There is enough variety amongst probably 50 works for visitors to find something to like or hate, to make them think or of which to  despair of making any sense.

Upstairs Susannah Clemence quoted from Milton's Paradise Lost where Eve is wondering whether to tell Adam about the tree of knowledge and her richly coloured oil painting showed Eve amongst foliage, holding an apple and nearby the serpent. I hadn't thought about this, that if the woman gave Adam the apple to eat  there was a moment when she could decide to keep it for herself. 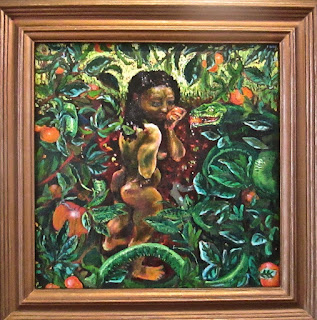 Nearby there was a painting of the coast from St.Agnes, showing patterns of light on the water. This was by Stuart Ross, but made more noteworthy by the words next to it 'Painting of a rice cake' which referenced a thirteenth century text, 'a painted rice cake does not satisfy hunger', and commentary about this, about the nature of reality and painted images. The two works held up equally as worthy of attention.

Andrew Swan had etched on aluminium an image of a female head representing homeless women next to statistics about this outrageous circumstance and a stamp with the same head replacing that of the Queen, provocatively next to the lyrics of God Save the Queen. 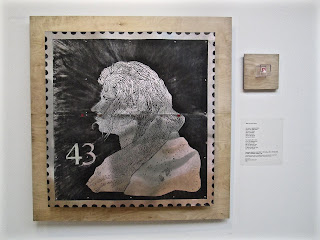 Downstairs Duncan Walters offered a chalk drawing of a computer on slate done so understatedly and cleverly that I at first walked by it thinking it was a laptop. It was on a table with one leg propped up on books and called 'The reference section'. 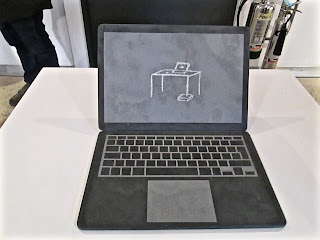 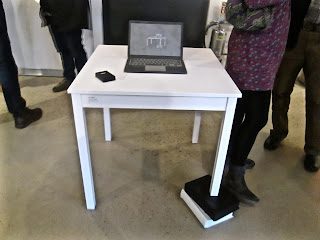 Gordon Ellis - Brown offered 'Houston we have a problem' , as a title but also printed on his aluminium panel next to a group of women like Steptford wives, a smiling but sad looking group, almost merging into the background, maybe the wives of the spacemen, maybe representing the parallel exploration of how to rethink the status quo to accommodate the feminist demands of women in the second half of the twentieth century and beyond.

Karen Lorenz made reference to a Roland Barthes essay. Her work was about dementia, the death of the person in a way as broken up jumbled images on video played within a printed book, the text upside down and a tiny paper house on top. This was not only clever but very eloquently sorrowful. 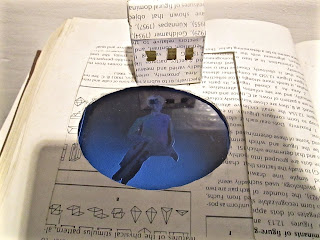 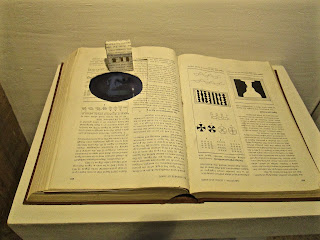 A show with many memorable images which repays time and attention. A show which demanded that artists grapple with ideas and which maybe shows a welcome  trend to comment on contemporary life seriously.
Posted by Mary Fletcher at 13:05 No comments: