I wake up early, eager to get to this show. Why? I want to see what this year of graduates have to show. Maybe I expect too much. Most of them are very young. The way the fine art is shown indicates nothing of the breadth and amount they have experienced. Their essays are not there, their books of ideas, we see no photos of them, very few give statements and some that do seem to be entering for pseuds' corner. 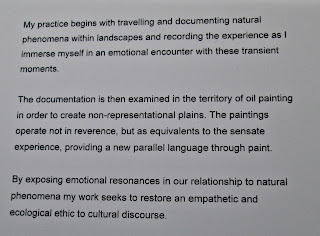 This year I was largely disappointed. This wasn't helped by the usual lack of a canteen on Sunday or even a stocked drinks machine, and the fact that catalogues had run out and most videos were not operating.

When I strayed briefly into illustration and found the room very dark to the point of eye strain and asked a student about this she said 'we do not find it too dark.' We found some lights and switched them on. This year the illustrators had their work on low cloche like displays on desks instead of in wooden booths at normal exhibition height for walking around. This made the room more open and spacious looking but it was harder to concentrate on an individual's work. Unlike the fine artists the illustrators show a lot of stuff. I just could not settle to examining it all and only admired one, Rachel Summers. She had illustrations to do with therapy and a light, witty, economical style.

Painters seemed to have a similar palette of green, pink and yellow as if the college had provided vats of certain colours. Drawing skills were scarce and in the drawing BA favoured laboured detail using H pencils with a few flashes of acute observation.

As an aging adult I am entirely unwilling to stoop to pick up information from the floor, to crawl into spaces, to remove my shoes, to subject myself to loud noise, claustrophobic constructions, or insanely bright light a la Don Flavin and I therefore missed a fair amount. 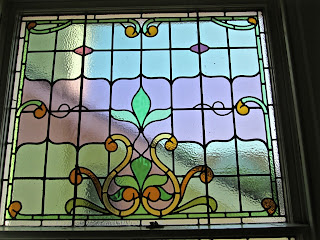 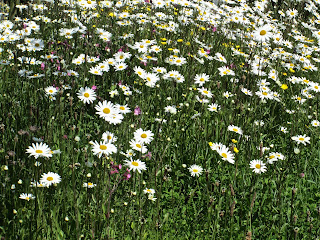 Travelling to the college hopefully, with a sustaining supermarket breakfast inside me, enjoying Wood Lane's lovely trees and birdsong, plus an old pond with tadpoles and stained glass windows, and Tremough's beds of daisies were more enjoyable than the art, although maybe because the exhausting looking at the show made my senses sharper as I became more sourly dismissive yet still craving excitement.


Best in show, and why not give the audience, which is meagre on the Sunday, a vote on this, was unhesitatingly awarded unaminously by myself and my companion to Finbar Conran's 'The protagonist and their lover' a charming, amusing, interactive piece with revolving trees and lights and music that were wired to come on if a couple sat down. It satirised romance whilst at the same time evoking it, changing our state of mind, making us laugh and getting us to participate despite being at the end of our walk round. 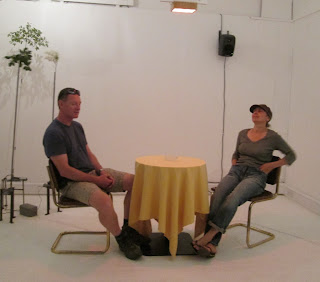 Whilst I was fresh and willing the first item I saw was a disturbing installation , 'Excruciating play' by J.F.Wilson. Lots to look at, many materials used and drawing us in to examine the quirky and sinister playground. 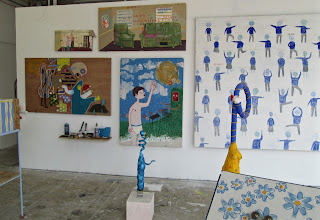 A couple of students, out of how many? Referred to refugee migrants. By combining deck chair canvas stripes with sand castles in the shape of coffins I thought Duncan Walters expressed how sitting on a beach nowadays brings to mind those dangerous voyages of desperate people. 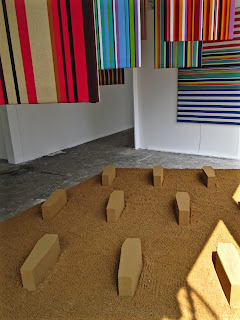 A painter I liked was Grace Green because her pictures were well drawn, many layered, elaborate, decorative constructions. 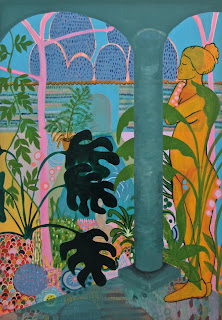 Over in the soon to be abandoned craft BA at Tremough there were several who could just as well have been in fine art although without these craft courses in the college how will students use glass, ceramics etc? Here there were references to the importance of bees and an impressive oil ruined mutation of a beast with the sound of its laboured breathing by Emily Yates, 'A toxic relationship' 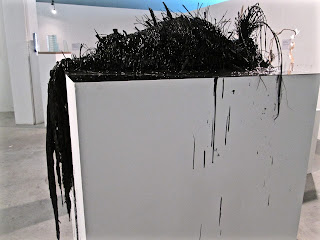 I missed so much, because it is far far too much. I missed all of architecture and product design and planning, photography of various sorts, film., performance, dance, and most of fashion and textiles.

What a pity to see no more than a dozen other visitors in several hours of looking round. Surely the college could advertise better, open the canteens and encourage the local population in and art dealers in? Isn't it worth even a double spread supplement in the local press? It's worth two days attention, but there we are, here today, gone in a few more as it ends on Wednesday, and for most students only a few business cards may fall into the hands of a rare helpful contact.

There they go, lambs to the proverbial, degrees on their cvs and thanks to the cruelties of capitalism only a small proportion can make a career that pays any bills. Nevertheless, I believe the three or four years gap for thinking , experimenting and experiencing before their noses strike sparks from the grindstone will help us all in a society too given over to merciless daily toil versus desolation row.