As far as I know CMR got involved to put this on at short notice because of a contact Cat Bagg had with Cinestar at Back Lane West. She and Alice Mahoney acted speedily to get this going and some of us put work in, installed all round the building in Redruth, which is conveniently near the cinema where Cornwall Film Festival was happening that weekend. Stuart Blackmore was technical backup.
I managed to get a poster put up inside the cinema just where people were passing to go into the films and I decided to add all our names to it as contributors to try to interest more people.
Attendance wasn't high, it was bad weather, but a lot of those going to the analogue originated films at Back Lane West probably came to it.
There was a nice spirit of helping together at the installation and feeling it had been a good idea at the end of the day drinks. Redruth closes early, most shops were shut at 4pm, it was dark and almost deserted, four saffron buns for a pound at Warren's, and they go outside and shout this to the few people passing.

Alice chose my 'Art Notes' from what I offered. It's a satirical piece about trying to make a mark as an artist and the sound, a song, is essential to it. I saw someone using the headphones and laughing so I was pleased. It can be seen on my Vimeo page, 1min 46. 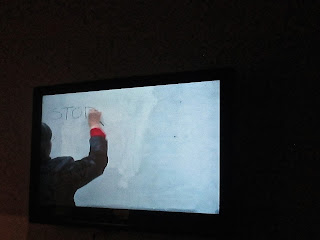 This brings me to a point that I like the length of films to be posted so I can decide whether to embark on them. I also like a notice about them posted by them and only some of the work had this, otherwise there were notes in a handout but only three copies of it. The notes were very interesting and illuminating.

On the same floor Fred McVittie had a piece which a young man told me he was very confused about. I asked if he was an artist and he said no, he was a media studies student, which seemed a bit sad to me to differentiate between the two. Fred's blurb referred to graffiti and protest art and the film, rather strange and menacing perhaps embodied I thought frustrated rage and alienation. 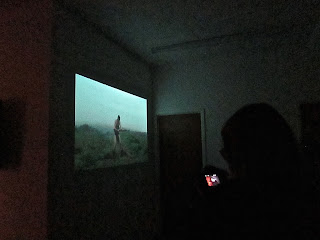 Alice Mahoney's 'feast' was really a metaphor about consumption, a rather grotesque meal slowed down. 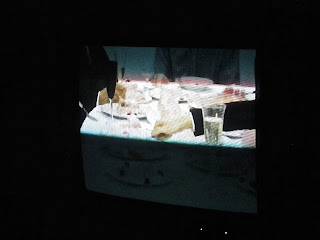 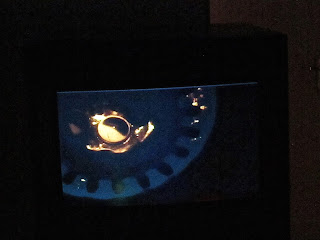 Claire Baker's video was projected in one of the rooms and made an impact as a lone adolescent girl wandered in a stark landscape, rather poetic and moody, a sublime contrast to Fred's figure emerging in a lonely landscape, and my person in an urban cul-de-sac. 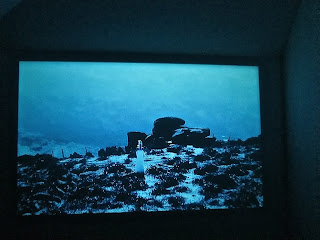 Downstairs Cat Bagg had work using standing stones that were seen in a whirling around inventive way inside circular vignettes with a pattern of lights on the floor. She explained to me some of the complexity of working out how this was done to fit the space. 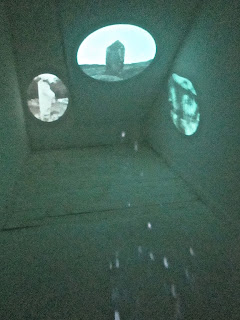 David Axtell had a brooding sunset behind a structure of Tibetan flags on a sea edge cliff and went alongside a poem about loss and war by Laurence Binyon. 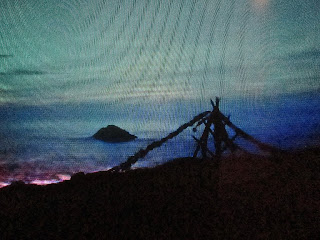 Frances Walsh showed 'Lighting a fire' , a beautifully filmed piece with clear colours and subtle sounds in which the artist collaborated with her young son. 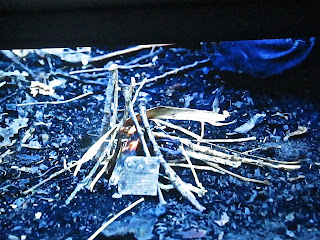 Morwenna Morrison also used a room to install her piece, which had a lovely old armchair for viewing and getting into the mood of her montaged shots from old footage about marriage, which cast rather a jaundiced and wry comment on the institution and is part of her focus on nostalgia in her work. 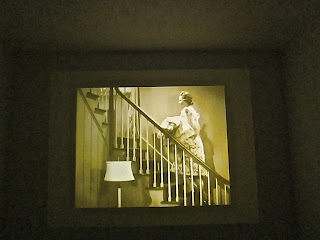 As usual a very mixed bag, easy to move amongst and take in as the visitor felt inclined.
This was in contrast to the Cinestar films at Back Lane West, which had the advantage of being seen from start to finish but the disadvantage that the rolling programme leaves a viewer stuck in experiences they may tire of because they are not to their taste. Some of it was very fuzzy, some abstract experiments that were a bit long for me. Also it was even colder than CMR and with only a hard box to sit on whereas up the road we did have a few chairs.

Meanwhile the festival was at the  proper cinema, this year warm enough thank goodness. It's quite expensive to go to things, it's reduced in scope, little publicity, no Cornish films, no artist-made experimental section now and I regret none of the cameraderie I  felt when it was all in Falmouth Poly or Princess Pavilions and one got into conversation and film making and film makers felt like a wonderful group of colleagues. There was more of that at CMR's impromptu drinks.

I saw at the cinema the films from Falmouth media program, and the room was packed with new students from the course. Oddly only three films were chosen to be screened and although they had some interest for me, some good acting, some novel ideas, the overall impression made on me was that all the students would be thinking they would do much better themselves.

This was followed by ' Taxi Tehran'  by Jafar Panahi , winner of the Golden Bear at Berlin Film Festival  this year, which I loved. It was ingenious, brave, funny and moving and so apt on the day after the Paris atrocities to see a film maker persisting in expressing himself within the oppressive regime of Iran, where he has been forbidden from making films and I read that one of his works was smuggled out to to Europe on a data stick hidden in a cake. I started to applaud and after a moment others joined in. It's the sort of thing that can happen at a festival showing.

So, from a completely realised drama about the most important things in life to experimental scratching on celluloid. An amazing day of contrasts.