There was a lot to see in this show, work from 50 artists, from several countries, which is going onto be shown in London.

I felt quite at home looking at it as I am familiar with themed  political work from the 80's when I was part of Brixton Womens' Work shows. There was a mix of printed booklets, video, participatory stuff and purely visual and there were helpful statements from the artists about their contributions.
I 'd have liked some work hung lower, some statements to make more sense, some information about the Artists and a printed list of them to take away, but in general it looked good, well spaced, easy to get involved for at least an hour and thought provoking. Someone visiting remarked how you see nothing like this in St.Ives, still dominated by what I call 'Penwithy abstraction', it's an invigorating change to be asked to think and for the artists to be involved in current issues such as the London riots.

Amanda Walsh, from Redruth, had obtained cc tv footage of misbehaving, to understate it, which was shown on a large screen, showing bluish video of night scenes of fighting amongst presumably drunken people in our streets and police dealing with the victims of it. There was some middle of the road bangy music which you could have on the headphones and which may help people to keep watching but I preferred it without the music as it seemed more real, less a balletic sort of clockwork orange thing. It was very impressively unpleasant and current and titled 'Tooth and Claw'

I wished this could have been in a window to bring in a larger audience, but the danger of attracting smash and grab thieves after the telescreen apart from the fact that the windows are reinforced and frosted made this unlikely. 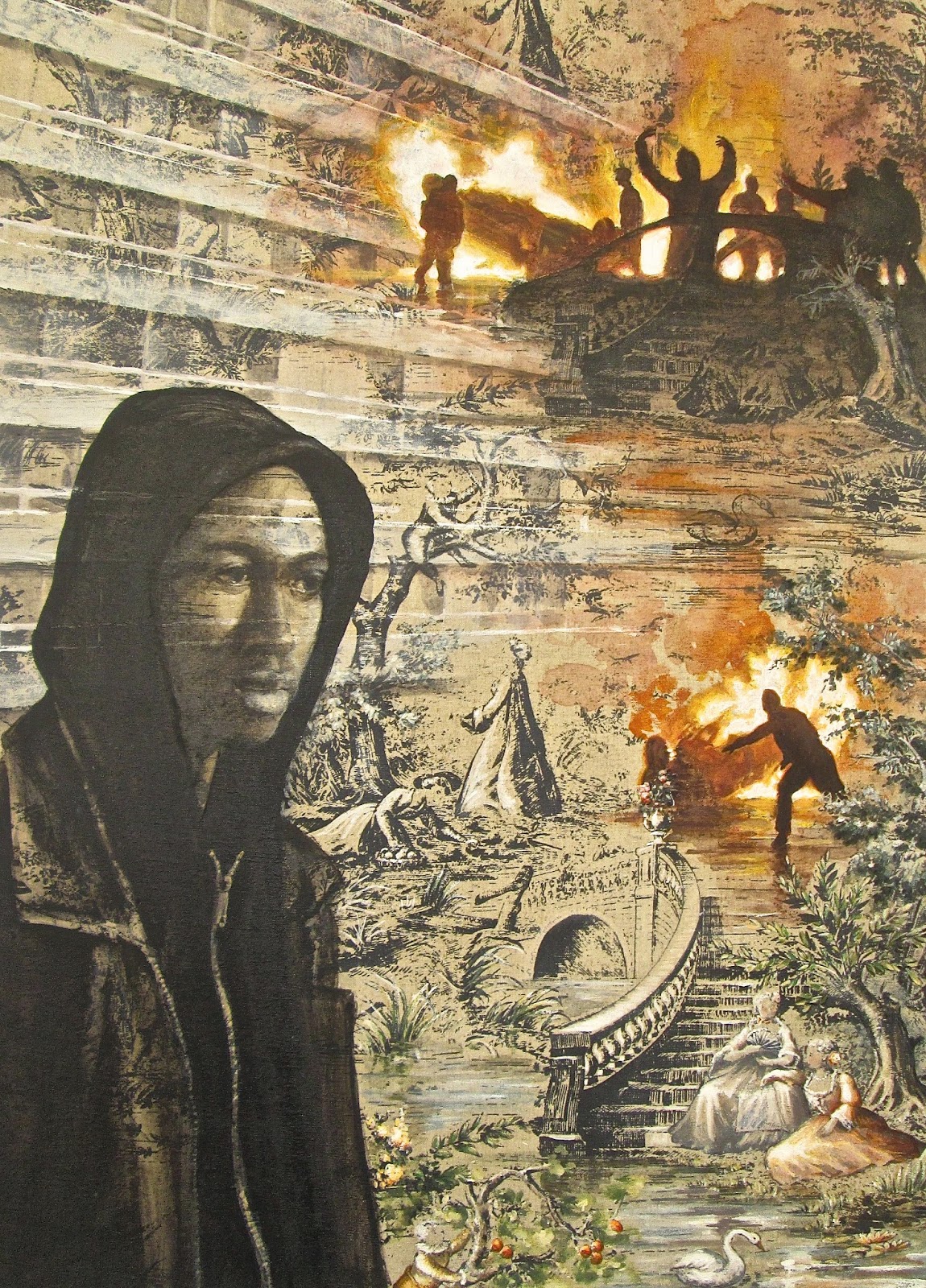 Next to it Alke Schmidt from London had a work painted on top of that furnishing fabric with a chic pattern of eighteenth century ladies and flowery bowers. Contrasting with that image of bourgeois interior design and comfort were figures of hooded youths, out of doors, the dangerous looking lowest rung of today's society, It was called 'Mind the Gap'- a title which I had used myself, here used with subtle power and wit.

More lightheartedly, Catherine Kontz from London , a composer, had a punch card operated musical box. You could make punched holes and feed your own composition in, turning a small handle, and because it was mounted on a small chest of drawers the sound was amplified pleasingly. 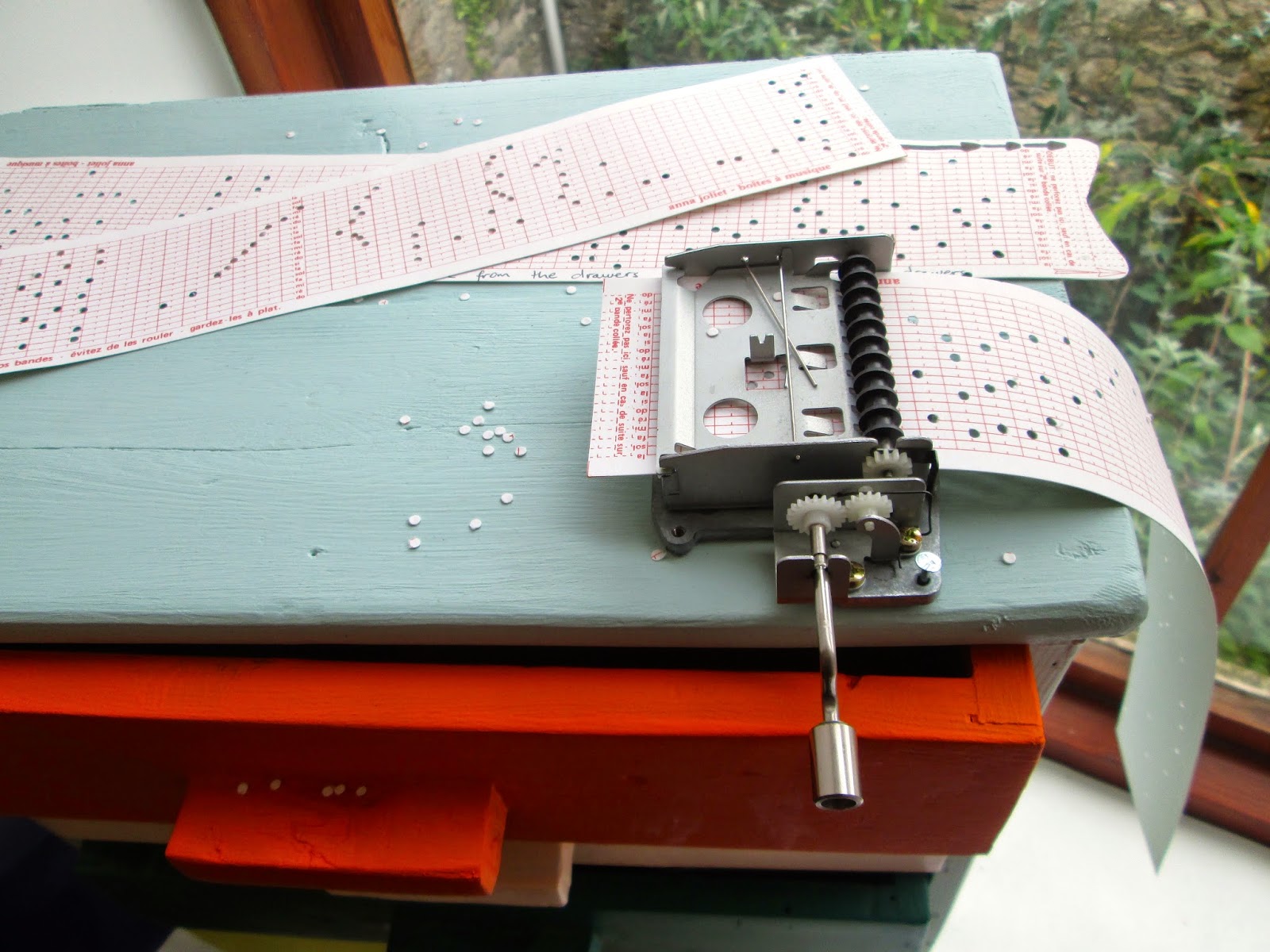 There was more to it, even instructions on how you might misbehave by not following the instructions. I immediately wanted one if these devices to play with at home. 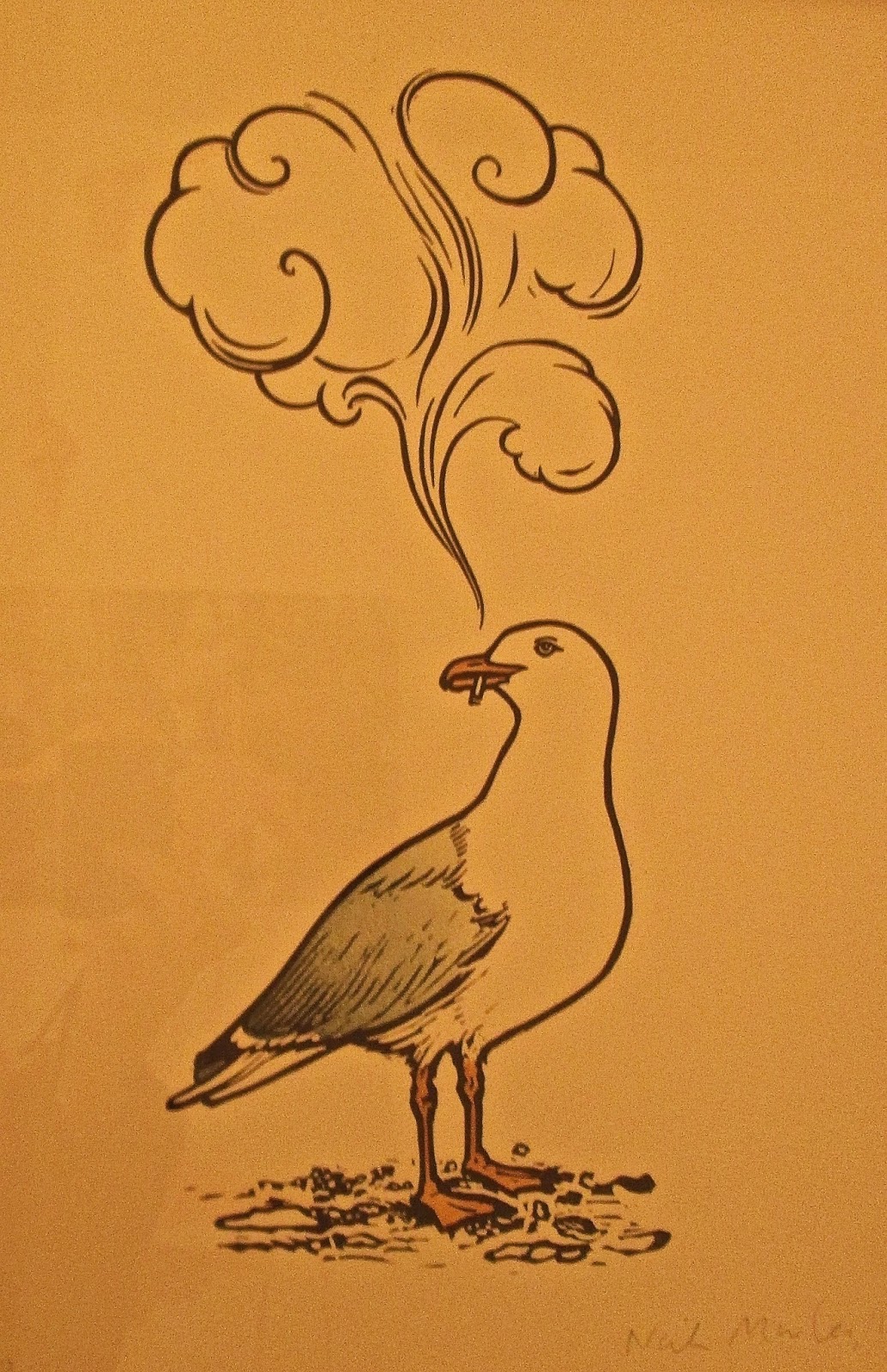 On the floor below I particularly liked the well drawn images of a smoking seagull and a Heath Robinson diagram of scrumping for apples and making and drinking cider. 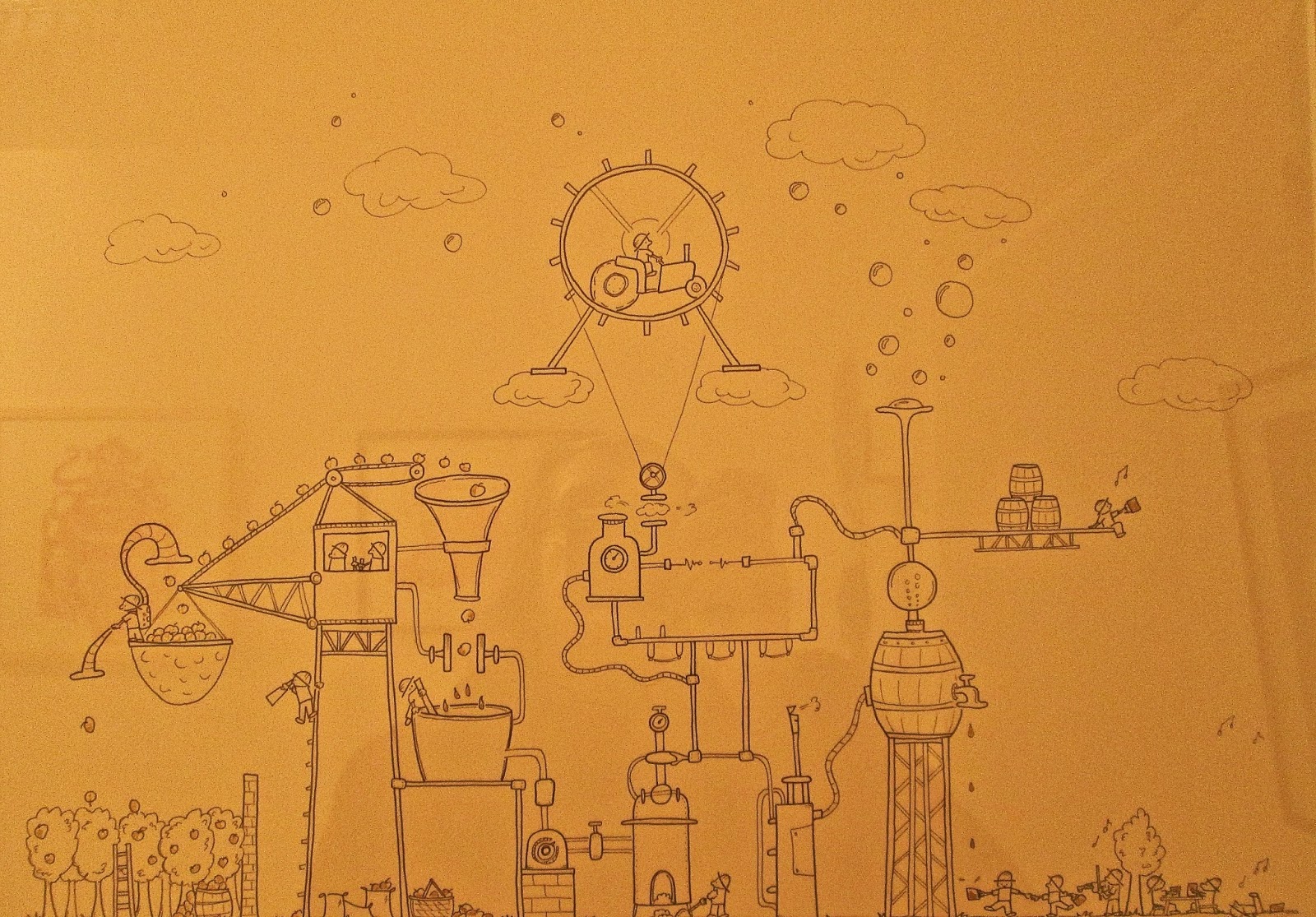 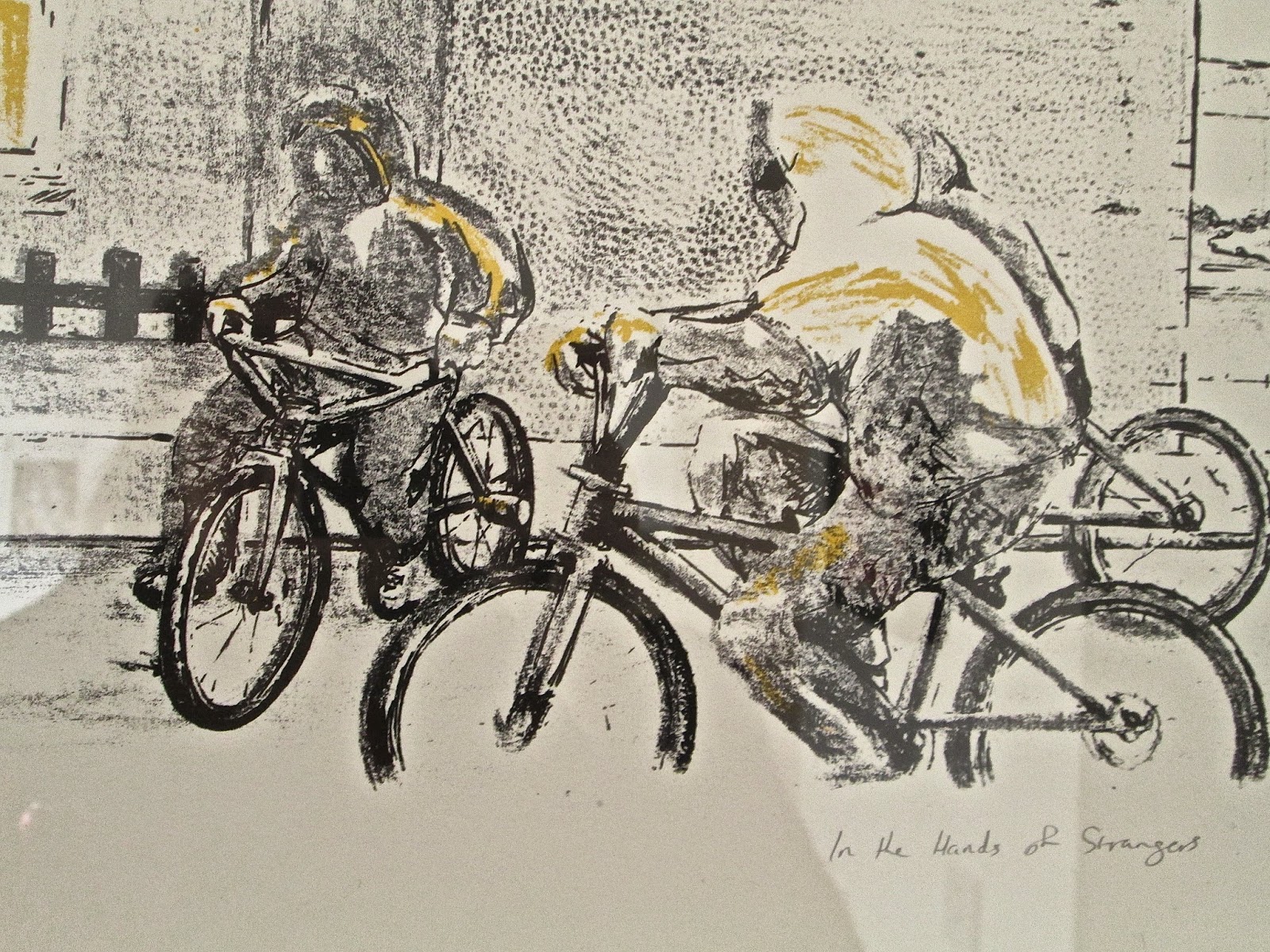 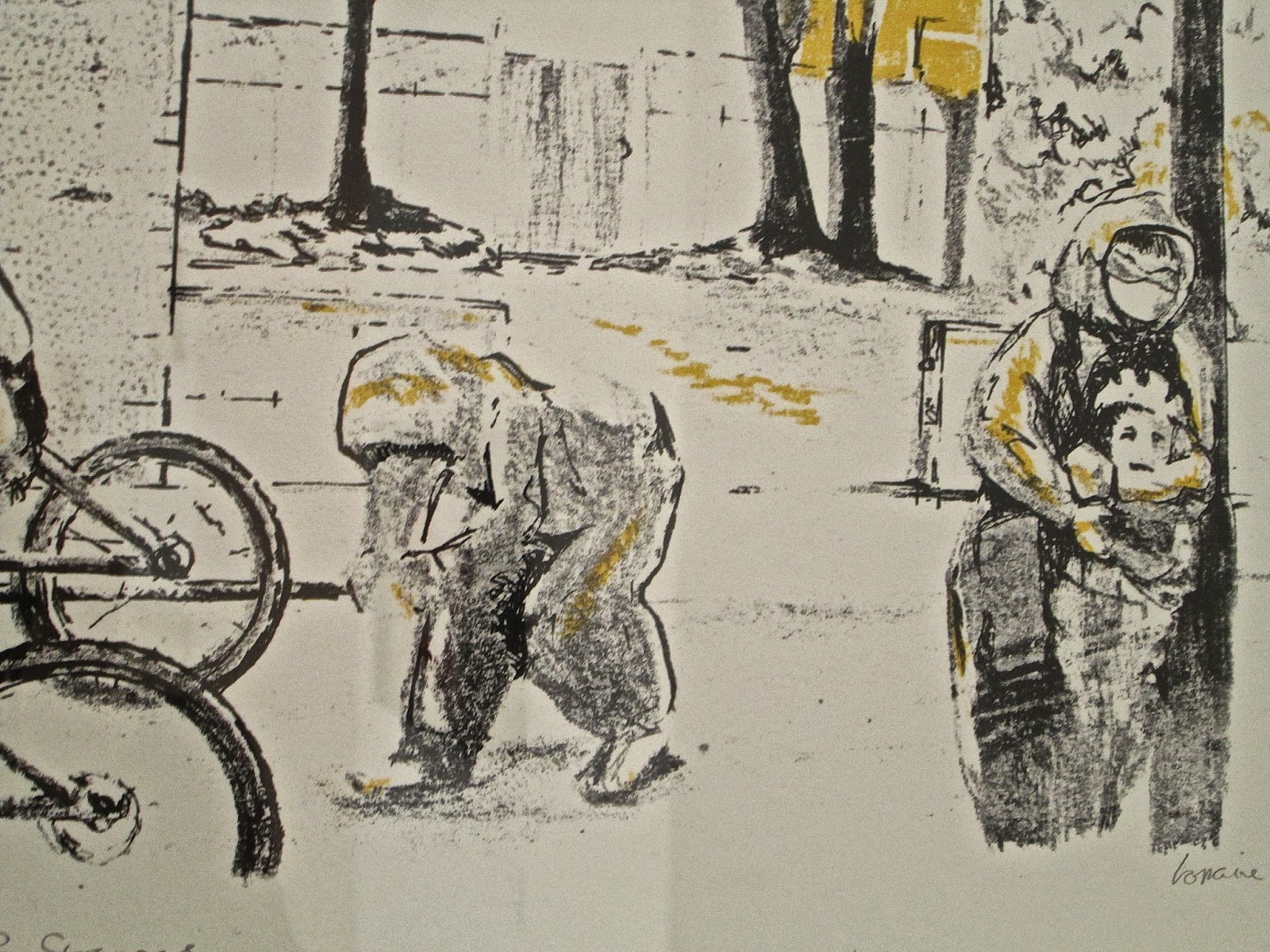 Also beautifully drawn, and employing the Grayson Perry tactic of enticing with technique to express something serious, was a drawing of a child being detained while youths stole his bicycle. 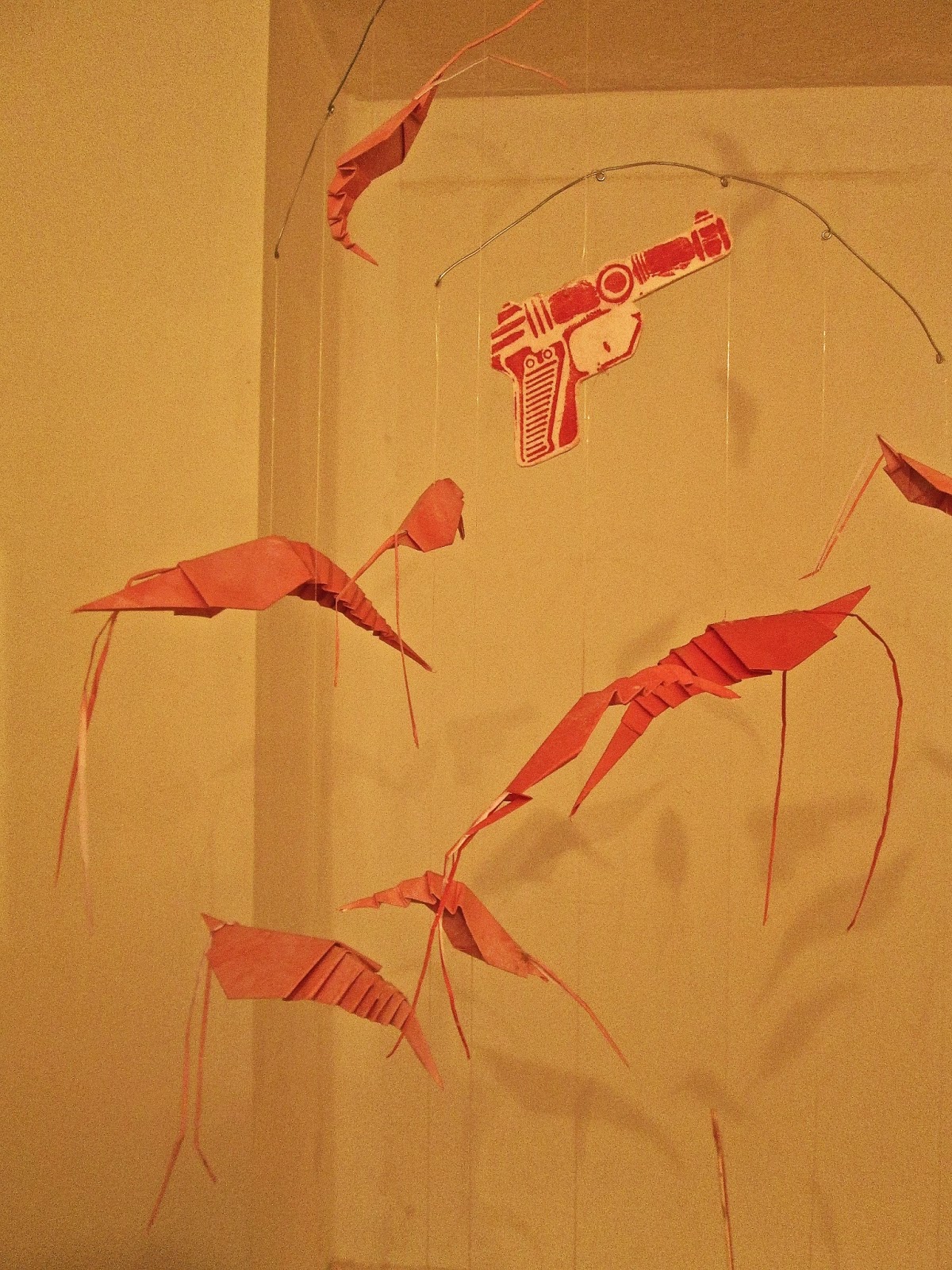 There was a turning hanging mobile of paper pistols and shrimps, referring to pistol-shrimps and the noises they make.

There were photographic booklets about the notices in our environment, an opportunity to write your confessions of your own misbehaviour or tell lies about it, something about being gay, references to the troubles in Ireland, many surprises to enjoy in fact whilst showing that artists are doing all sorts of things that are relevant to contemporary life.

CMR exists to show this sort of current work and it was well worth seeing. 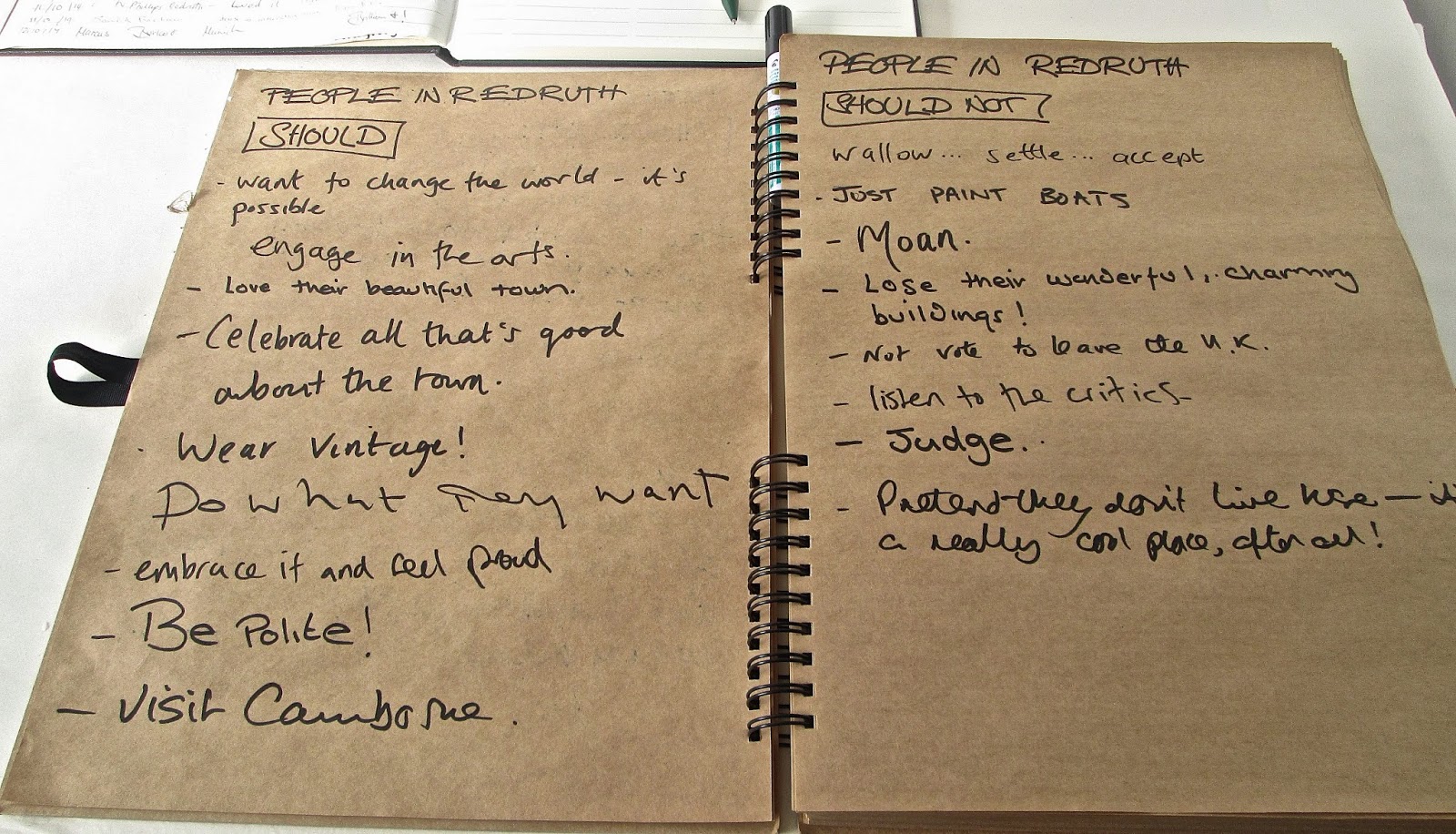 Posted by Mary Fletcher at 06:39 No comments:

My first impression is how similar this is to say Falmouth BA show, how international is the current contemporary art. There is  video, some so dull you could scream, references to Catalan, Ukeles, odd things on poles, totems, a thing that looks very delicate and works electrically that moves that has broken, a motorbike burnt and lit by a sodium light, the work of Quentin Everte. 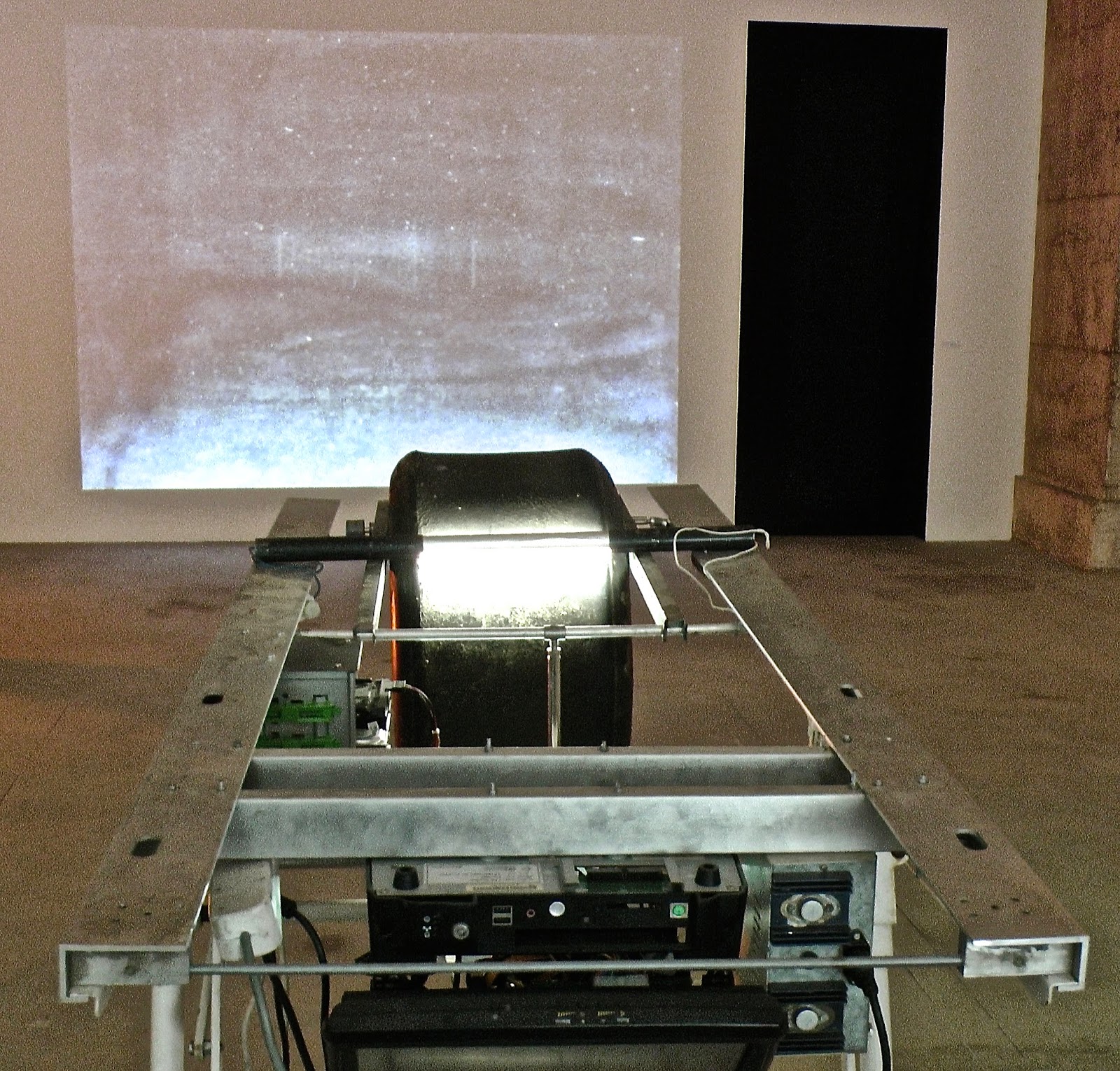 The surface of a tyre is being scanned and projected.At first I took it to be a video of the inside of a van with just a crack of light, maybe about immigrants being illegally smuggled in, but it's not, that's my idea for a work.
I apologize for not having the name of the artist.

The first prize the curator tells me has gone to the sound installation, so subtle that I had not noticed it, beautifully installed with pastel lit small speakers above our heads, and now I hear some bells coming from it. Simon Nicolas made it.

There's video of cleaning up after fireworks like we saw at the port a few days before but with it jerky hand held shots of children on a beach, I thought maybe also clearing, but they aren't, and five minutes to watch time code projected, which seems interminable sitting in the dark. Its by Celine Fantino.

The video of a woman  cleaning a floor and then brushing her hair with the dirty brush I am informed is a reference to a famous picture by Caillebotte of workers cleaning a parquet floor.
There is also video of a desert and a pool table with messily painted areas and paint on the balls.
There are pieces of shaped stone in an old display cabinet.
There are rather beautiful photograms of snail trails on black by Sergio Valenzuela Escobedo. 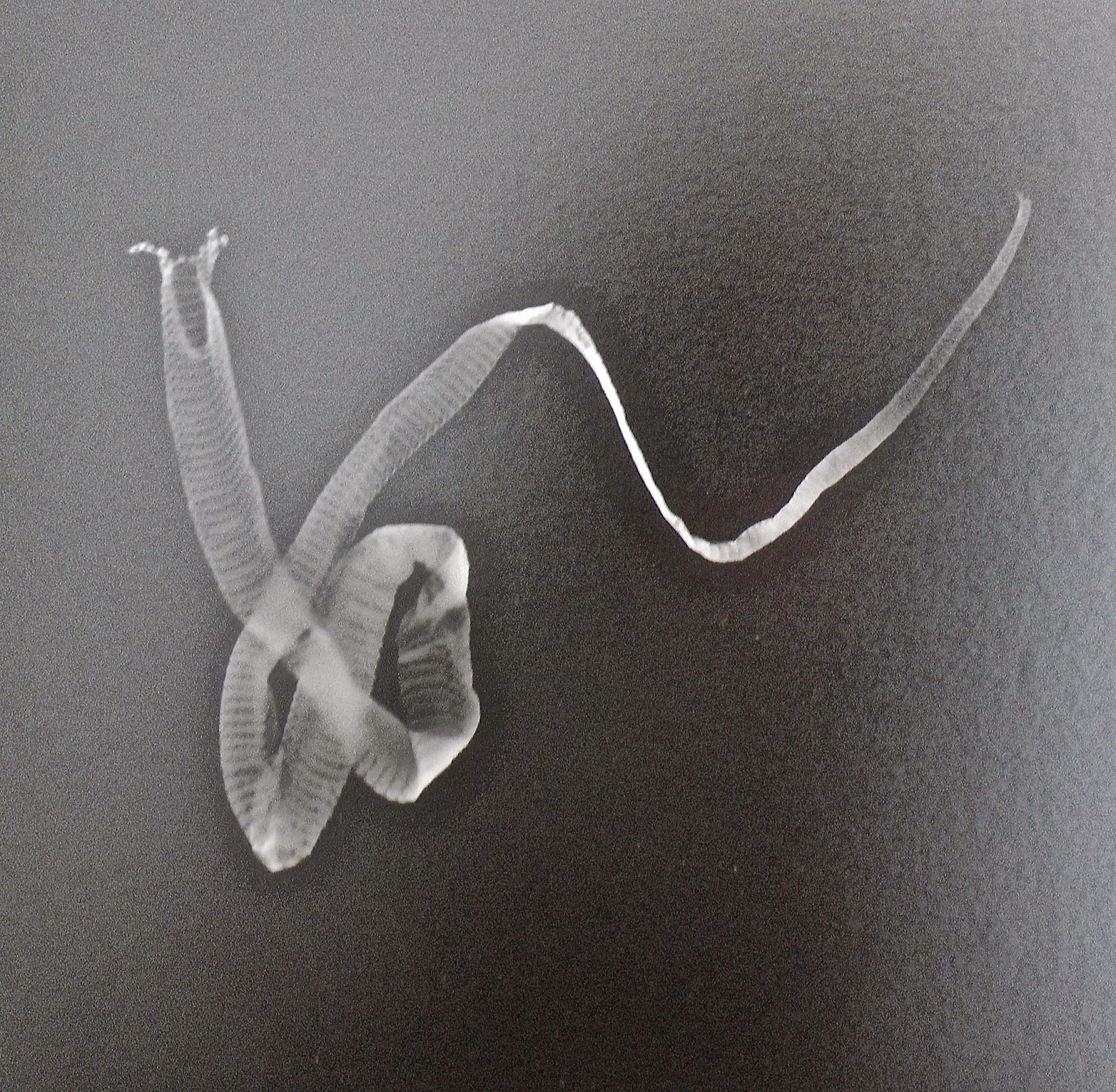 The main difference from the Falmouth show is that this one, in two venues, the larger of which I did not get to, is open for several months so it gets a reasonable audience. Falmouth is only open a week, similarly the MA show, when it's highly likely there will be no refreshments and very little publicity for the artists who have worked very hard in most cases and yet it isn't even shown so that the new students could see it, let alone showcased to any art dealers who might provide future opportunities. Is this because the new cohort will be much the same, no point in letting them see the last lot? There is also a free informative illustrated leaflet  whereas at Falmouth you have to buy a catalogue. Also there is a curator present who is happy to speak to me.

Earlier in the week we had been to the gallery in Nice which shows nineteenth century works. This again was a Europe wide style, of heavy dark interiors, narratives of slave girls and gods, history paintings, admirable in their care and observation, skill and industry, and how different from our age of peculiarly odd stuff.

What does it mean that the lightness and love of life of the impressionists is lost to us, and what will be next?

Was there ever thus a mass of similar art and a few things get through, through to be kept and valued, known in the canon, and from even earlier just a few things remain, not valued as masterpieces but merely for their survival, any prehistoric image is remarkable, we don't say one is good or bad.

The contemporary scene is hard work, varied, scrappy, the art seems thrown together in an afternoon, without skill, without coherence, we feel tired, unwilling to read pretentious blurb, ready for lunch.

I find I want some joie de vivre, I've just returned from the intoxications  of Matisse , Bonnard and Picasso, let's find some joy in living now despite the horrors!
It's this that I always find in dance, in jazz, in holidays in hot countries, in flaneuring,  and it insists on getting into my art alongside the douleurs.
I buy one of Sheila Stayne's sculptures, back home  in St.Ives, its to be worn round my neck, made in felt, it's deep blue with orange and pink, a 3D Trevor Bell inspired creation. Posted by Mary Fletcher at 07:19 No comments: