I turned up just as staff put up the 'Open' sign but the artists were a little later.
Upstairs the room looked a bit sparse and the two artists did not say anything to me, but were happy to talk when I began. It seems they aim to link their work by Saturday but so far there is a big space between them so it's hard to imagine. They are both on the BA at Falmouth and it's as if what they might do in their spaces there has been done in this huge gallery space instead so that the public can see, rather like the tv program,' What do artists do all day'.

Emily Ross describes it as getting out of the confines if the studio, but of course the footfall here is not very large, makes me think how nice if they could be found space at a supermarket, which I suppose is very unlikely. 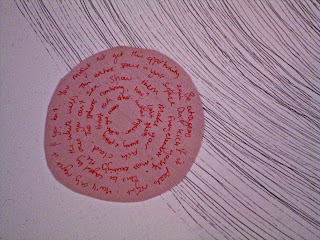 Emily has been drawing round and round starting from the inside and previously from the outside, as a performance and trying to be fully present in the moment. 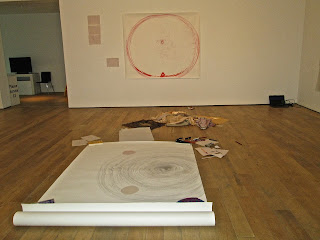 Rhys Morgan has been typing on an old typewriter  and videoing it to a tv monitor and has blue velvet playing as soundtrack to 'Death in Venice' and an attractive writers brass lamp. It's something about the image if a writer. 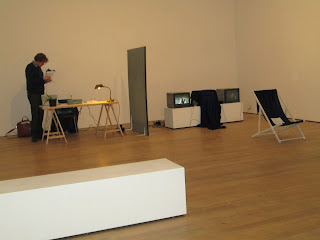 To me it's fairly obscure and also in several days I think they could have done a great deal more, but I am a lot older and tend to work fast in case my time runs out.

There is no concession to the viewer, such as not putting unclear type on the floor too far away to be read easily, or putting some
handwritten notes too high up on the wall for me, at 5 foot  two.
The blurb in the leaflet mentions appropriation, juxtaposition,the subconscious and volatility in a paragraph which seems to touch a few bases whilst not making anything clear.

Downstairs I encounter Rob Gawthrop and son? who is helping, and a room strewn with sound equipment and musical instruments, a violin, cow bells, cymbals etc. Rob has explained in the leaflet that he will be performing using noises from the beach and it's unfortunate that I am here several hours before the performance, which I imagine will be fun and wish I could hear. It takes me back to the sixties, art college experiments etc. which is apt as Rob teaches at Falmouth. 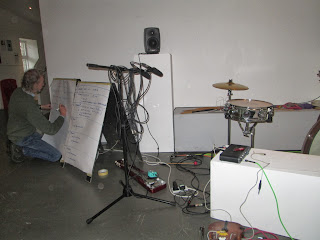 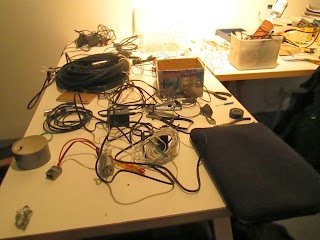 It's using the immediate environment outside and makes me want to try it too, but the sight of acres if electric cable and leads with different ends and microphones reminds me of happy days playing in a room at Falmouth myself with my film of Porthmeor, having spent several days out in bad weather struggling with a giant camera they lent me.

So, that's it, four weeks of various beginnings and now I want something finished, maybe Andrew Lanyon's show at Falmouth municipal gallery.

Even better would be if all these artists from this years' transitions came back with finished pieces a year or so later.

Maybe the audience for these transitions events could feedback online and the artists reply with feedback on the feedback. I believe film makers such as Woody Allen show a film in progress to audiences and react by making changes if things are reported as unclear, unbelievable, not funny etc. , but do these artists really seek any feedback, do they care if the audience can understand the work ? Do some of them  to my mind hide behind saying they don't seek to be explicit and it's up to the audience to interpret as they wish?

I always want to be clear and understood and like feedback.
What about some feedback on my blog here? Is anyone reading it beyond the three or four I am aware of?

There were three artists upstairs who work with the outside world.
David Paton had granite,some fired in a kiln so it goes from green to pink.He works in a stone quarry and talks very engagingly about questions of sculpture in and out of the quarry. He was full of lively enthusiasm and very pleased to have brought stone into Newlyn Gallery and carved into it there, although to do this more than briefly would be I advisable for health and safety reasons. 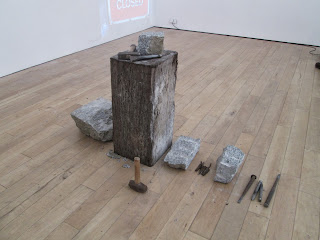 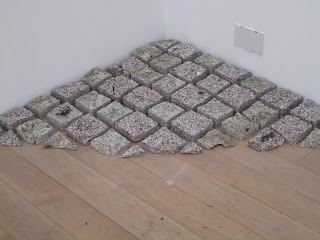 Veronica Vickery had ingeniously joined pictures arising from her study of a particular stream so that the canvasses went round corners and made a meandering path on the wall. 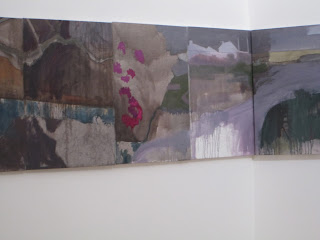 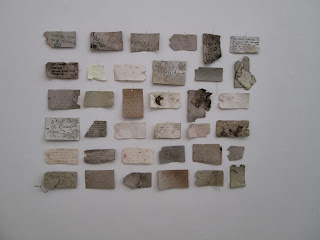 Jane Bailey was most unusual in combining an interest in local issues and political action.

She had taken up the case of the re-opening of the Mexico rail foot crossing at Long Rock and had encouraged folk to post their views, now assembled on the art gallery wall on attractively weathered labels in a grid pattern. She also showed protest placards. I would have liked more information about the fatal accident there, about whether crossings are being closed in general to save money in maintaining them, but anyway it was great to see an artist putting local politics into the gallery and engaging with people involved in protest.
(Since then I read that the appeal to re-open the crossing was lost)

Downstairs Val Diggle was equally open to talking about her work, which to me was a baffling
collection of items referring to ancient civilisations, including our local men-an-tol holed stone. There was a willow construction which made shadows. Her interest is something to do with memory and it's variability. We, Pedyr and I, added to the event by trying to remember the basics of the Argentine tango, me singing the tango tune 'jealousy' spontaneously, inspired by a print of dance steps on the wall.

It was the third week of transitions and I was still interested in the wide-ranging investigations of these artists. Could they be asked back with finished work? Or is this inexplicit woolly searching the point? - the process not the product as Marshall McLuhan might have said in the 60's, but in fact he said 'the medium is the message.'